By Tulane University Louisiana Research Collection (LaRC) - August 15, 2011
Every August 29th since the Hurricane Katrina disaster, we memorialize those who died because of the storm and the flood in 2005. At the same time, we now celebrate the remarkable accomplishments of the citizens of New Orleans and the Gulf Coast, over these last six years. Our library holds a large array of materials devoted to Katrina and its aftermath; in fact, Tulane University and the Howard-Tilton Memorial Library are part of the story.

Two colorful and fascinating books, which focus on New Orleans after the storm, are located in the Louisiana Research Collection, with another copy each in the Howard-Tilton stacks: 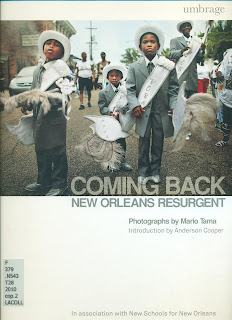 This is a photographic documentary volume with an emphasis on the suffering and destruction of the storm, followed by the spirited resilience of Katrina victims who were determined to come home to rebuild their lives in the years after the diaspora. The subject is primarily but not exclusively New Orleans. Particular sensitivity is given to the portrayals of young children. Anderson Cooper states in his introduction, "New Orleans ... is a city of memory, but not a museum. It is alive, and dynamic, full of life and joy, and success." 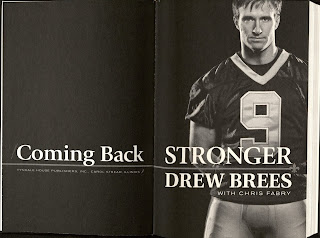 Drew Brees presents this memoir about his own life, faith and family, and the story of Katrina, especially in relation to the New Orleans Saints. To illustrate the the physical and emotional extremes, the conversational narrative is enhanced by a selection of photographs of the Superdome and flooded city during Katrina, contrasting with the Saints’ victory in Super Bowl XLIV, and the joy of riding through New Orleans in one of the Saints Super Bowl parades. (click on tag label "New Orleans Saints" at right for four posts about the Saints.)

The Howard-Tilton Memorial Library web site has a research guide on Katrina resources, providing wide-ranging support for learning about the hurricane, the flood and the recovery efforts.

To see earlier posts in this blog, marking the Katrina anniversaries in 2009 and 2010, with additional links about resources and related annual activities, see: