Showing posts from August, 2015
Show all

LaRC books-- Down at the end of the river 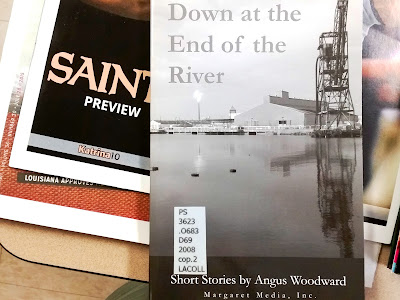 Woodward, Angus. Down at the end of the river : stories / by Angus Woodward. Donaldsonville, LA : Margaret Media, Inc., c2008. Howard-Tilton Stacks PS3623.O683 D69 2008 Jones Hall Louisiana Research Collection PS3623.O683 D69 2008 LACOLL In this collection of short stories, Angus Woodward colorfully describes the circumstances, surroundings, and relationships of assorted fictional individuals living in southern Louisiana in recent years.  One story, "That German Girl" is set immediately post-Katrina.  Others, like "Qatar Is an Emirate" stretch back in time into the 1990s.  A few are almost timeless, especially "Guttering Out," a small and surreal slice of French Quarter street life. The grouping of stories does not have a single point of view or tone, but together they present the elusiveness of close personal relationships and are linked by the common Louisiana setting.   Each story actually is short, begins with a strong sente
2 comments
Read more

LaRC announces Katrina 2015 project In remembrance of the ten-year anniversary of Katrina, the  Louisiana Research Collection  is acquiring and permanently preserving pamphlets, flyers, scrapbooks, diaries, letters, and the personal accounts of people who experienced the disaster. Katrina was an extraordinary historical event endured by a broad range of everyday people, as well as their families and friends whose lives were affected by the Katrina diaspora for years afterward. Please help us ensure that their experiences are not forgotten. The first such donation was made this summer by LaRC Archives Catalog Librarian  Susanna Powers , now available as LaRC Manuscripts Collection 1085, detailing her experience of the storm itself from inside the Louisiana Superdome, and personal and family events of subsequent months. If you have similar personal accounts, or brochures, forms, and flyers relating to the disaster, please let us help you permanently preserve them for future genera
2 comments
Read more 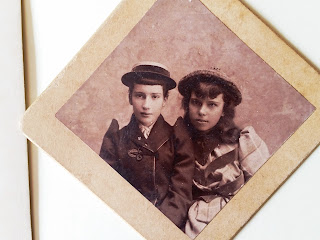 Pierce Butler (1873-1955) was an American scholar, teacher, college administrator, and author, most closely associated with Sophie Newcomb College in New Orleans, where he served as Dean, and taught English literature and history. Among his scholarly publications was a biography of Judah P. Benjamin. Multiple ancestors and his son were also named Pierce Butler; one of them, Maj. Pierce Butler (1744-1822), born in Ireland, fought in the Revolutionary War and was a plantation owner with holdings in Georgia and South Carolina. Professor Butler (1873-1955) was born in New Orleans, and was buried in New Orleans. He also lived for a time at Laurel Hill in Adams County, Miss., a plantation home near Natchez that was destroyed by fire in 1967. His wife was Cora Waldo Butler (1877-1942). In 1954, Dr. Butler published a memoir, Laurel Hill and later, the record of a teacher, which is included in this collection. A dormitory on the Tulane campus is named in Dr. Butler's
1 comment
Read more
More posts