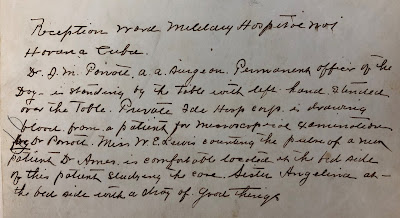 A graduate of the Tulane Medical Department (1890), Ames served as an ambulance student at Charity Hospital and assistant house surgeon at Hotel Dieu. He was associated with the United State Public Health Service in New Orleans and served as a surgeon during the Spanish-American War.

Ames believed that yellow fever was not contagious and that the disease was transmitted by mosquitoes. He served as a contract surgeon with Major Walter Reed during the famous yellow fever experiments in Cuba at Camp Lazar, where he contracted the disease during his service. Dr. Ames was 44 years old when he died on November 15, 1914, at Port Barrios, Guatemala.

The scrapbook documents his travels to Hawaii, the Philippines, China, Japan, and Cuba. Most of the images are commercial photographs sold to tourists but are often heavily annotated by Ames with his recollections and reflections.

Mr. Hero donated the scrapbook in memory of his wife, Danella Primeaux Hero.