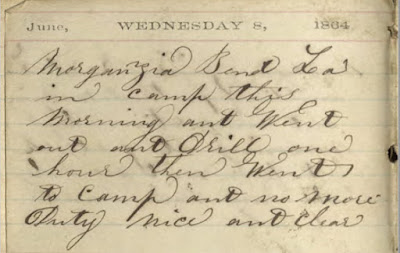 LaRC has recently placed online the diary of Simon M. Bott, private in the 120th infantry regiment of Ohio (E Company). Bott was a Union soldier whose regiment was in Louisiana from 1863-1865. He was mustered out of the army while in New Orleans on June 5, 1865.

Private Bott was age 29 when he enlisted in Plain Township, Wayne County, Ohio, August 15, 1862, in Company E, 120th Ohio volunteer Infantry. Under Sherman he took part in the battle of Chickasaw Bayou. Mr. Bott also participated in the battles of Arkansas Post, Thompsons Hill, Port Gibson, Champion Hills, Black River Bridge, siege of Vicksburg, siege of Jackson, Brandon. He was on the City Belle during the Red River expedition when it fell to the Confederacy and was burned.

Interesting diary entries include a brief mention of an injured friend in a lone entry on April 4th 1864, dated accounts of marching from Alexandria to Morganza (May 12th to the 21st), the burial of a C. Bandanston on Aug 11, 1864, and Bott’s meticulously dated and timed journeys from Morganza to New Orleans then from New Orleans to his home in Wayne County Ohio.

Bott also mentioned his stay in several locations. These include: “Camp Plaquemine” (January 1864), Baton Rouge, Louisiana (Early May 1864), Alexandria, Mississippi (Mid May 1864), Fort St. Phillip, near Triumph, Louisiana (May 19th and the 20th), Morganza, Louisiana (End of May to September), and New Orleans.

You can view this diary and other letters and diaries of Unions soldiers serving in Louisiana here.