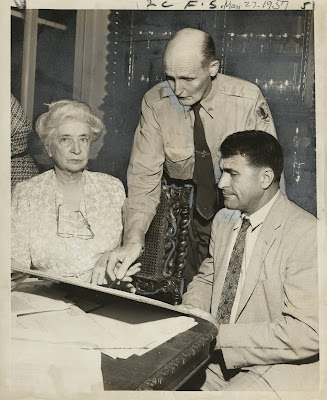 While Martha Gilmore Robinson's personal correspondence had previously been released, Camila Rodriguez, a LaRC student employee, recently processed Robinson's papers related to the sesquicentennial commemoration of the Battle of New Orleans, the creation of Chalmette Battlefield park and monument, and the proposed construction of the Riverfront Expressway. These newly released documents also record Robinson’s involvement with the Vieux Carre Commission, Save Our Riverfront, and her role as a founding member of the Louisiana Landmarks Society.

The Bernard Lemann papers preserve the Tulane architecture professor’s correspondence, manuscripts for books on Louisiana history and architecture, and notes for lectures on historic preservation. The collection also features records from his work with the National Register of Historic Places, the Louisiana Landmarks Society, and urban planning issues such as the Riverfront Expressway.

The Robinson and Lemann papers capture the activities of historic preservation advocates during the mid-20th century when technological innovation came into conflict with relics of New Orleans unique past. The Louisiana Landmarks Society was established in 1950 to advocate for historic preservation, and when the Riverfront Expressway was proposed in the 1960s, various groups collaborated to save the French Quarter and Marigny, Both the Lemann and Robinson collections document the development of preservation as a defining force in the city at a critical time.

Image: Discussing a petition drawn up at a meeting of the Louisiana Historic Landmarks Commission protesting the proposed location of a sewerage and water disposal plant, May 27, 1957. L-R, Martha Robinson, Lyle Linch, Calvin Claudel. Click to enlarge.