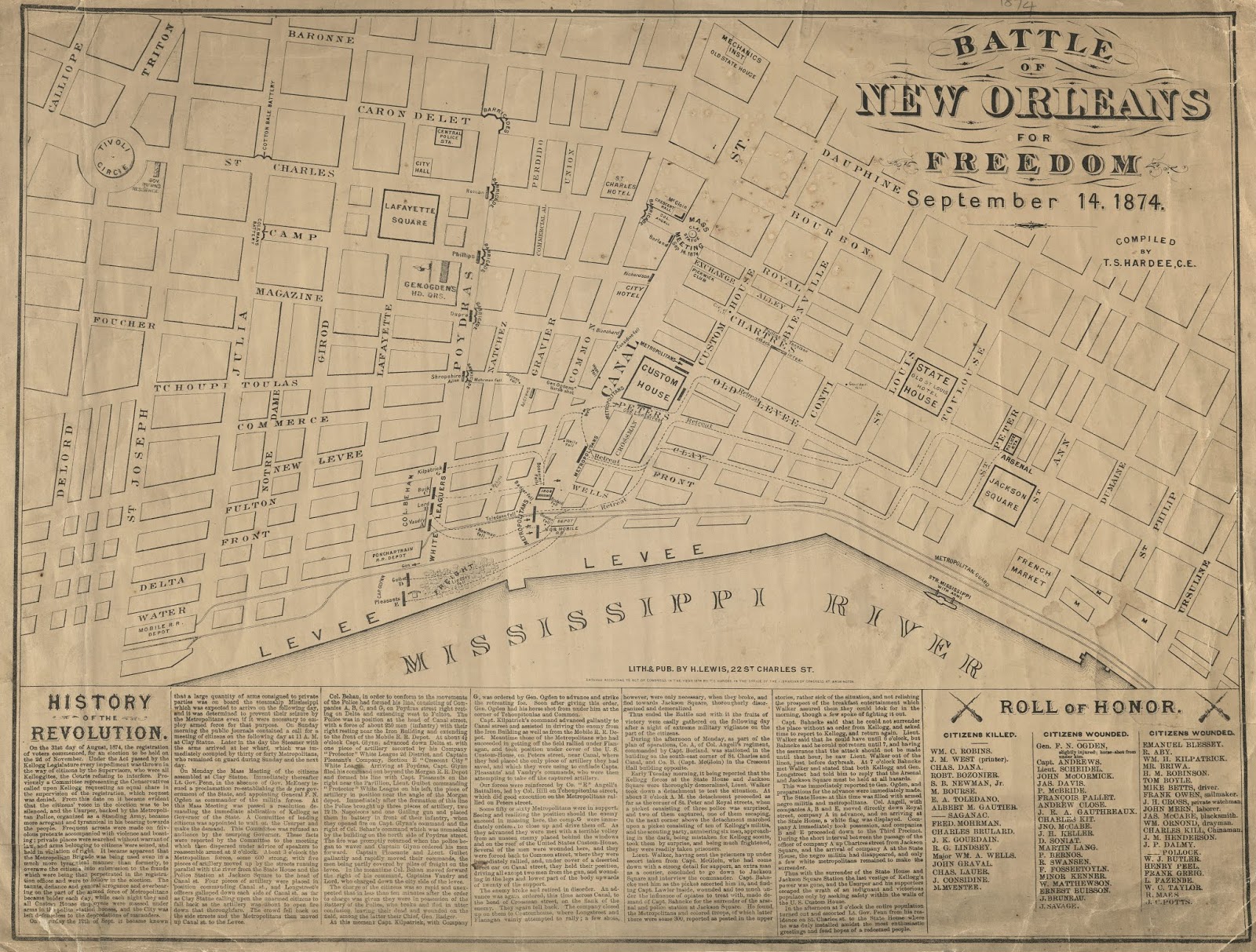 A dramatic and extremely rare plan of the 1874 White League Revolt in New Orleans, published within weeks of the events depicted.

In 1874 anti-Reconstruction forces established the White League, a military force of some 1500 white males, organized into companies, well trained, and armed with surplus weapons from the Civil War. On September 14, the government seized the steamboat Mississippi, which carried a covert shipment of arms for the White League. In response, companies of White Leaguers established barricades along Poydras Street, then advanced on Metropolitan Police units emplaced along Canal Street from the Custom House to the River. The Metropolitans were quickly routed and retreated to the Jackson Square Station, where they were surrounded and surrendered the next day. President Ulysses Grant immediately ordered Federal troops to retake the city and the White League surrendered within days.

This pro-White League plan by New Orleans City Surveyor T.S. Hardee must have been published in late 1874, within weeks of the battle. It depicts the heart of the city from Delord Street downriver to Ursuline and inland as far as Baronne and Dauphine, including the street plan, Jackson and Lafayette Squares, the State House, the Custom House and other landmarks. Against this backdrop are shown the positions of the combatants and the general flow of the battle. The White League positions and barricades along Poydras are shown in detail, with individual companies identified and their officers named. Dotted lines indicate their advance on the Metropolitans positioned at the New Orleans and Mobile Rail Depot, and the subsequent retreat of the Metropolitans to the Police Station. There is much other detail, including the positions of important White League leaders and the various locations where several people fell in battle. Columns of text give a detailed “History of the Revolution,” with actions by White League companies alphabetically keyed to locations marked on the plan. At lower right a “Roll of Honor” lists those White Leaguers killed and wounded in the engagement.

The map was printed in two editions; this is the first. Both editions are extremely rare, with only seven other known copies in American institutions. LaRC would like to have both editions; if your family has a copy of the second edition that they would like to ensure is permanently preserved, please contact us, larc@tulane.edu.