By Susanna Powers - January 02, 2017
The Japanese Garden Society of New Orleans began in the mid-1980s with the purpose of establishing a Japanese garden in New Orleans.  Planning for the project continued through the 1990s and the garden was installed at City Park in 2003, near the intersection of Harrison and Marconi. Its formal name is Yakumo Nihon Teien, honoring Koizumi Yakumo (author Lafcadio Hearn, 1850-1904), recognizing his role in advancing the cultural connection between Japan and the United States, especially New Orleans. The garden and tea house were repaired after Hurricane Katrina. 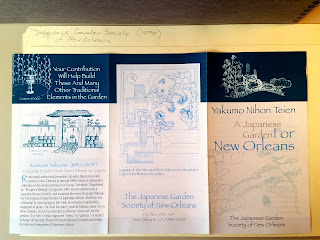 The library holds over five hundred books and other resources by and about Lafcadio Hearn, and most of these are in the Louisiana Research Collection.

Caption: a fund-raising brochure prior to the installation of Yakumo Nihon Teien within City Park's Botanical Garden, showing the proposed design plan.    Japanese Garden Society of New Orleans records, 1992-2007, Manuscripts Collection 1090, Box 1.  Images of items held in the Louisiana Research Collection may not be re-published without permission. 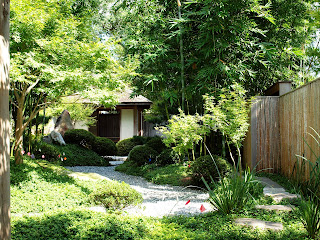 Photos of the garden and post by Susanna Powers