By Susanna Powers - December 09, 2016
The Arts Council is currently sponsoring a festival (annual through the New Orleans tri-centennial year, 2018) called LUNA Fete --  “Light Up NOLA Arts.”   This is described as “the Arts Council’s experiential community-wide event that unfolds over the course of a week,” this year, December 7 – 10.   Light shows and other visually bright art installations are sponsored by numerous businesses, foundations, and other community partners, for the purpose of advancing the arts and advancing tourism.

A similar idea was proposed in the 1970s by the Vieux Carre Commission, and supported by Mayor Moon Landrieu, called the Sound and Light Project, inspired by the European “son et lumiere” productions.  It involved a year-round nightly sound and light show in Jackson Square for the tourists’ education about the history of New Orleans.   This project was rejected for a variety of legitimate reasons, including noise, taste, and expense, and in retrospect possibly the overzealous scope of doing the shows every day all year.  Possibly too, the new emphasis on light (combined with much more advanced 21st-century technology), rather than both sound and light, has helped the LUNA Fete be received more favorably.

To gain a better understanding of those different times in New Orleans, in the not-so-distant past, LaRC preserves resources such as the records of organizations active during that era.    At least two of the archival collections hold specific information on the proposed Sound and Light Project of the 1970s:

Numerous other LaRC archival collections and books deal with the mid-20th-century efforts of local individuals and organizations to preserve the quality of the French Quarter and downtown, while also trying to build the tourism industry in the city.   Researching these topics is also supported by accessing digital archives of the Times-Picayune, such as the article, “Casting a Pall on Sound, Light” by Frank Gagnard, April 29, 1973, section 2, page 12. 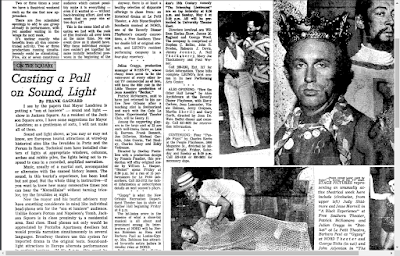