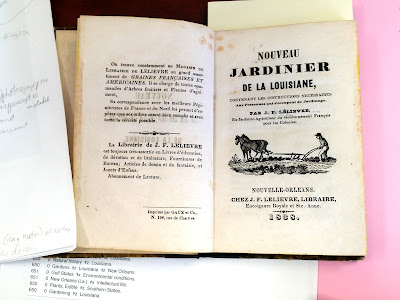 In 1971, Mrs. B. Stanley Nelson (Mary Hutson) of New Orleans donated some of her father's papers to Tulane University.  Charles W. Hutson (1840-1936) had been a literature professor, author, and artist at Louisiana State University during Reconstruction, who later settled in New Orleans.

LaRC Manuscripts Collection 563 is made up of Charles Hutson's draft typescript translation from French into English of the bulk of J. F. Lelièvre's 1838 work, Nouveau jardinier de la Louisiane, plus handwritten notes and newspaper clippings. The only dated item in the collection is a newspaper clipping from 1921. The text describes plant species most successfully grown in Louisiana in the early 19th century, covering both ornamental and edible plants.

Having access to the books of the Louisiana Research Collection, preliminary research quickly turned up the original 1838 book in French, as well as an elegant, different translation of it into English, published in the 21st century by Sally Kittredge Reeves, titled Jacques-Felix Lelièvre's New Louisiana gardener.

A brief sample of the three sources, comparing one plant, shows slight differences in translation.

[1920s]   GOOSE FOOT (MOUNTAIN SPINACH)   Sow in February or March, September and October; every kind of ground suits it; water if the earth is dry.  The leaves of this plant serve to sweeten sorred [sorrel], whether in soups or in stuffings; they are also employed in herb-gumbo.

2001:  GOOSEFOOT (BEAUTIFUL LADY)   [Fr. Arroche; Lat. Atriplex hortensis L.]  Sow in February or March, September and October; all kinds of ground suit it; water if the ground is dry.  The leaves of this plant serve to sweeten sorrel, whether in soup or in stuffings; they are also used in gumbo z'herbes.

Comparison of different works over time and in different formats is made possible by the unique collections of LaRC.