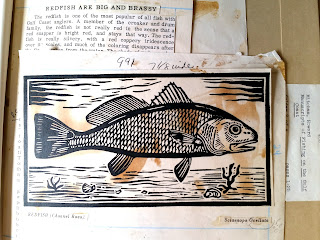 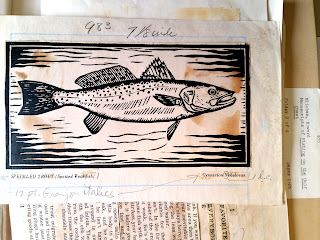 James Howard Mitcham (1917-1996), a native of Mississippi, was an author, artist, gallery owner, and gourmet cook, best known for his cookbooks which specialize in seafood. He lived at different times in Greenwich Village, Provincetown Mass., the Gulf Coast, and New Orleans.  He has been described as a French Quarter bohemian and a Renaissance man.  His stationery described him as the Creole seafood gourmet.  Howard Mitcham donated his papers to Tulane in 1977.

The Louisiana Research Collection holds both the author's manuscript (LaRC Manuscripts Collection 483) and the resulting published book, Fishing on the Gulf Coast (New Orleans, Hermit Crab Press, 1959), SH 464 .S6M5 LACOLL.  The archival collection primarily consists of an edited page proof for Fishing on the Gulf Coast, which was intended as a casual guidebook to catching and cooking fish from the Gulf waters off Louisiana and Mississippi. The text is witty and has been illustrated by the author.   Prints of his own woodblock and drawn artwork depicting different kinds of fish, and hand-drawn fishing maps are included in the collection, as well as a handwritten letter and a business card. 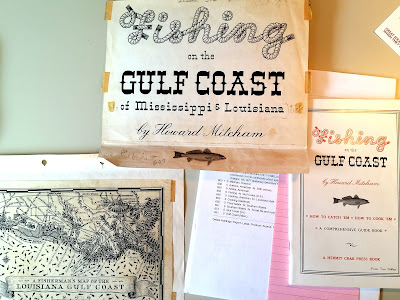 These works will be of interest to researchers in art, writing, publishing, fishing, the Gulf Coast, Southern foodways and New Orleans cooking.

Captions: artwork depicting redfish and speckled trout, accompanied by recipes; archival items with the completed 1959 booklet.   Manuscripts Collection 483, all folder 2; two copies of the book are in LACOLL.  Images of items held in the Louisiana Research Collection may not be re-published without permission.