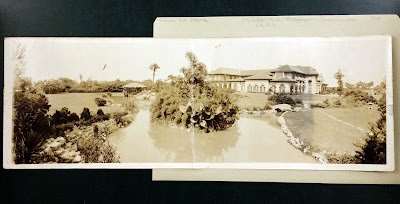 LaRC Manuscripts Collection 394 (K. W. Pedersen photograph collection) contains images of the McFadden House in New Orleans, photographed by Charles L. Franck and associates, and collected by gardener K. W. Pedersen. Included are numerous monochrome photographs of the gardens of the estate, as well as the opulent interior of the mansion. Several are large panoramic prints, emphasizing the expansive grounds and gardens. All are undated but were made between 1919 and 1955.

Kristian Vilhelm Gumme Pedersen (1896-1981), born in Jordlose, Denmark, came to the United States in 1921 and was naturalized in 1925. Later he used Wilhelm or William as a middle name. He worked for many years as a gardener at City Park (the location of the McFadden mansion), and later as head gardener at Tulane University until his retirement in 1961, when he returned to Denmark.

Charles L. Franck and associates had a photographic studio at 409 Baronne Street.   Franck was active in this business until 1955; per the rubber stamped information on the verso of the prints, these were "photographs from Chas. L. Franck," or "Progress Photographs," perhaps indicating that the date of these photographs may have been in the late 1930s or early 1940s, while the WPA was active.

The mansion was built in 1909, and bought by the McFaddens in 1919, as a vacation home-- somewhere to stay while visiting town for Mardi Gras.   In 1960, the Christian Brothers School opened in the historic house. 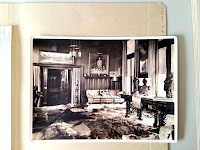 Captions: a panoramic shot of the McFadden House and surrounding landscape; a photograph of the interior of the McFadden mansion, complete with wall-to-wall bear skin rugs and other hunting souvenirs.   LaRC Manuscripts Collection 394, Box 1.