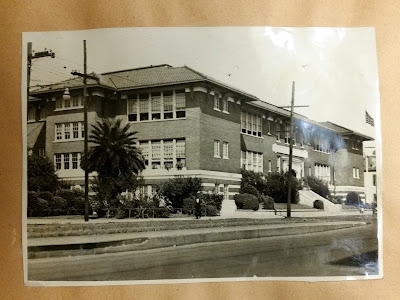 The Robert C. Davey School, located in 1936 at 1307 Dryades St., between Erato and Thalia, was built on the site of two previous schools, the Webster School and the Jefferson School. Around 1911, it was named in honor of New Orleans politician Robert Charles Davey (1853-1908), who had served in the U. S. House of Representatives.   Later in the century, this building housed the Myrtle Banks Elementary School.

LaRC Manuscripts Collection 184 consists of scrapbooks compiled by teachers and students of the Robert C. Davey School. Vol. 1 includes keepsakes commemorating the twenty-fifth anniversary of the school in 1936, such as invitations, programs, telegrams, greeting cards, ribbons, buttons, leaves, children's artwork, mounted photographs of the school, teachers and other school employees, and other items of social ephemera. Vol. 2 includes school papers covering sessions in the 1950s. Images of the nineteenth-century schools on the location, newspaper clippings and other printed items are also included. 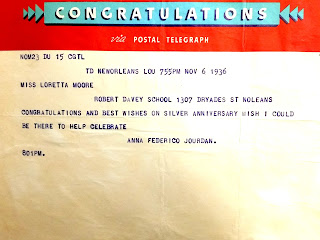 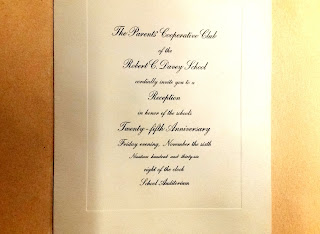 The Sunday, April 3, 2016, online Gambit featured a story about a new use for this old building, (this segment of Dryades is now known as Oretha Castle Haley Blvd.)  Dryades Public Market hosts opening ceremonies April 14 and 16.     Congratulations on this new venture!

Captions: from Manuscripts Collection 184, v. 1.   Photograph of the Davey School around 1936, a telegram of congratulations on the 25th anniversary celebrations, and an invitation to the same event.  Images of items in the Louisiana Research Collection may not be re-published without permission.