What is under New Orleans 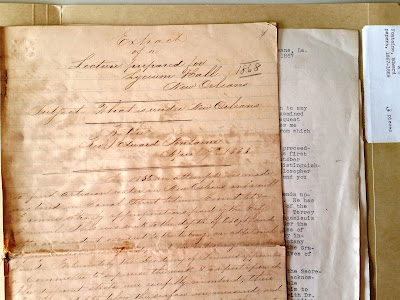 Rev. Edward E. Fontaine (1814-1884), professor of theology and natural science, wrote and lectured in association with the New Orleans Academy of Sciences during the mid-nineteenth century.  He authored scientific papers on hydraulic engineering, geology, geography, and archeology.   His published works may not deal directly with his basic religious worldview, but in other papers this is addressed.

LaRC Manuscripts Collection M-8 is a small set of Rev. Fontaine's papers, 1867-1868.   This collection consists of professional papers, including a fourteen-page handwritten extract of an 1868 lecture, in which he advocates for maintaining a well to acquire healing effervescent artesian water from beneath the city of New Orleans, which would have medicinal benefits such as curing yellow fever and cholera.  Also included is a typed transcription of an 1867 letter from E. E. Fontaine (as secretary of the New Orleans Academy of Sciences) to Mrs. Marie B. Williams of Alexandria, inviting her to do research at the academy's museum, where he has offices.   In both documents, he mentions J. L. Riddell, whom he describes as "the most accomplished natural philosopher the South has yet produced."  He writes also that he is working on a book, The Testimony of Natural Science to the Truth of the Bible.

In Rev. Fontaine's 1868 lecture, he bitterly complains about the failure of the City Council to follow through with building an artesian well in Canal Street, but concludes with flowery praise of Louisiana and its natural resources.


Extract
of a
Lecture prepared for
Lyceum Hall
New Orleans

Subject – What is under New Orleans

In 1856 an attempt was made to find artesian water in New Orleans, and a well was bored in Canal Street between Carondelet & Baronne Strs. by appropriations paid by the City Council.  This was sunk to the depth of 630 ft., and after an accident occurred to the tubing, an additional appropriation was refused, and the enterprize was abandoned.  Fortunately the Academy of Sciences appointed a Committee to supervise the work, & to report upon it.  The different strata were carefully numbered; their thickness & depth below the surface were measured; and specimens of each were preserved in bottles; & their contents examined & analyzed.  From the reports of that Committee, I have been able to make the map of the Section of the well now in the Academy.

The accurate measurements & descriptions of Dr. Benedict, the skillful analysis of Dr. Riddell, and the materials of the strata brought to the surface, & preserved, are sufficient to enable us to understand much about the structure of the Delta which would have otherwise remained to the present time entirely unknown.

Aided by the map of this well, I will now proceed to examine more particularly what is under New Orleans, from the bottom of the boring to the surface.
…

When its shore was far above this City, the annual floods of the Mississippi made deposits in its deep water which were arranged according to their Specific gravity.  Some settled down into water several hundred feet below the sea level, others lodged upon shallow bars, while lighter particles floated off with the tropical current far from our Coast.

The storms of the Gulf then heaped upon these, river deposits at all depths, sand & shells.  These were again covered with the deposits of the River; & the same action of the Gulf buried them again with marine matter.  The mudlumps with their gas & Artesian waters, then rearranged & solidified the whole.  As the Delta was thus formed above this City, and under it, so it is in a state of formation now; but at this distance from the Gulf, the velocity & force of the caving in its banks & shifting its channel has evidently been continued here for many years, & perhaps for Centuries.  It is forever at work tumbling in one shore, and adding a sand bar to the other.  Its course is a serpentine succession of Curves, & the plantations with their protective levees on the concave face of the Curve were doomed to inevitable destruction under the present system of defence; while the convex shore is growing into sand bars, & pushing the river from its bed, to sweep away the land of the opposite side.

An examination of a section of its bed will enable you to understand this—which is the greatest danger to which New Orleans is exposed.  A glance at the Map of the Artesian well will show you its exact composition to the deepest part of its bed or the bottom of the River.  The depth seems to have changed greatly.
…

In this huge mass of sand 145 ft. thick the celebrated Bladon Springs water was reached which flows out of the top of the well, at the rate of Six gallons per minute.  A careful analysis of it made by Prof. Riddell for the Academy found it to be identical with the water of those celebrated Springs in Alabama; but in addition to its superior medical properties, it effervesced, & made a more pleasant sparkling beverage.
…

To obtain this valuable tonic, hundreds travel out of the State, or import it at great expense.  Thousands of dollars are spent to obtain it, when it is easily accessible at small expense, and inexhaustible quantity.  It is certainly found in a vast basin of Sand known to be 145 ft. thick.  It is reasonable to suppose that such a stupendous stratum extends laterally to a great distance; & that it not only underlies every part of this City, but extends under the whole delta of Louisiana.  Why was it not secured?  And why cannot we obtain it now?  …It is most disgraceful to this City, & the record of the fact will ever be a foul blot upon her history, & it will be read with astonishment by the enlightened generations of the future, that in the year 1856, in spite of the assurance on the part of learned geologists & chemists, that artesian water could be found here at no great depth & in great abundance, and in spite of the known fact that inexhaustible supplies of the best medicinal water in the world were buried at a depth of only 430 ft., & were ready to flow out in healing streams for every family then living in the City, & that deaf to the petitions, memorials & remonstrances of a learned Academy, her City Council refused to make an appropriation to secure this hidden wealth, & which has been neglected to the present day all their successors.  This is still under New Orleans!  Is it possible that this great City is too ignorant, too poor, or too unpatriotic to benefit itself, by the expenditure of less than $10,000?   If a small joint stock company with a capital of $5000 could be formed, with the improved apparatus for boring wells in this Soil, with no rock to encounter in 200 yards—this Bladon Spring water could be obtained in sufficient quantity to enrich the body Corporate & to save the lives of thousands.  Where the Great Creator has given a city the finest River in the world to bring wealth of all Continents & Oceans to its wharves, to irrigate its gardens, to cleanse its streets & to purify its atmosphere, and it will not improve its navigation and control its power, it can surprise nobody, if it is undermined & swept away by its waters.     And where in addition to this, the same kind providence has not only provided the means for filling it with wealth, adorning it with beauty, and purifying it from all that is offensive and deadly, it has constructed a fountain of healing water pure as that of Silva, which they will not pierce and use, surely if her Citizens die with yellow fever & cholera, they can only blame themselves for their afflictions.
…

But the Delta of Louisiana is a new land, growing continually, and it seems to be invigorated with the strength, and animated by the hopefulness of Youth; No trace of age or premature decay has touched its lovely form.  The elements above, beneath & around it are friendly to its mature development.

The cold waters of the North tempered by the winds of the South, & the waves of tropical seas do homage to it, as to a young queen, and lay all the costly offerings, of their Commerce of all climes, at her feet.


Her children, nature born & adopted, may well be proud of a mother land so young & so fair.  Let it be their delight to develop her resources, to adorn her with all the improvements of art, and crown her with glory.

Images of items held in the Louisiana Research Collection may not be re-published without permission.