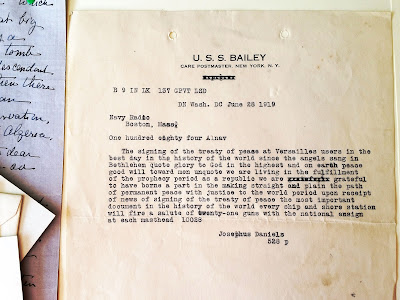 Caption: a Navy Radio typed order by Secretary of the U.S. Navy, Josephus Daniels, ordering "every ship and shore station" to fire a twenty-one gun salute in honor of the Treaty of Versailles, June 28, 1919, ending hostilities of World War I.  Morse and Wederstrandt families papers, 1789-1954 (LaRC Manuscripts Collection 107, box 2, folder 6).  Images of items held in the Louisiana Research Collection may not be re-published without permission.