By Susanna Powers - October 28, 2015
What do you think of when if you hear “New Orleans” and “hot dogs” together in the same sentence?  Some will think of the traditional or trendy lunch delicacies served by Lucky Dogs or Dat Dog.   Others will remember one of Ignatius Reilly’s attempts at employment in John Kennedy Toole’s A Confederacy of Dunces.

Clippings, often considered redundant in our current research environment, may bring to light unexpected stories.  One such case in point-- numerous newspaper clippings in this collection feature a 1950 incident having to do with the questionable contents of hot dogs being served to children in New Orleans school lunchrooms. 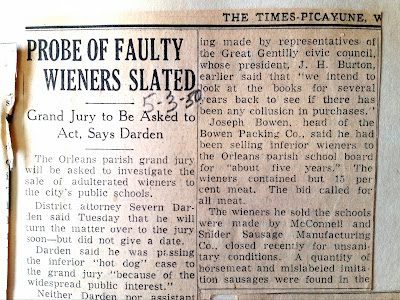 The Orleans parish grand jury will be asked to investigate the sale of adulterated wieners to the city’s public schools.
District attorney Severn Darden said Tuesday that he will turn the matter over to the jury soon—but did not give a date.
Darden said he was passing the inferior “hot dog” case to the grand jury “because of the widespread public interest.”
… made by representatives of the Great Gentilly civic council, whose president, J. H. Burton, earlier said that “we intend to look at the books for several years back to see if there has been any collusion in purchases.”
Joseph Bowen, head of the Bowen Packing Co., said he had been selling inferior wieners to the Orleans parish school board for “about five years.”  The wieners contained but 15 per cent meat.  The bid called for all meat.
The wieners he sold the schools were made by McConnell and Snider Sausage Manufacturing Co., closed recently for unsanitary conditions.  A quantity of horsemeat and mislabeled imitation sausages were found in the…

An online newspaper search of the scandal reveals that, although there was general concern for the schoolchildren’s well-being, the issue was not brought to light because of health concerns as much as by the discrepancies in bookkeeping.   Someone realized that the price being paid for the inferior hot dogs over five years was too low a price for all-meat hot dogs.

The odds are very good that John Kennedy Toole, born in New Orleans in 1937 and raised locally, actually consumed some of these lunchtime offerings during the late 1940s.   The public controversy and somewhat humorous journalistic treatment of the situation may have inspired his young imagination. 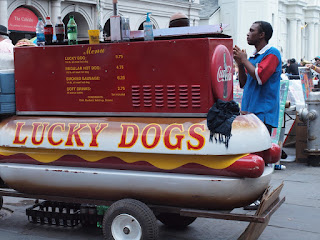 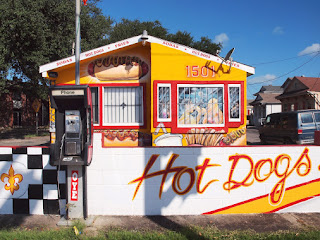