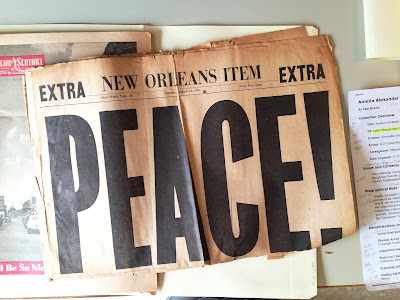 Amelia L. Alexander (d. 1959), also called Mrs. Sam Alexander, worked as a volunteer coordinator providing support to American soldiers during and after World War II.  Her primary affiliation was the National Jewish Welfare Board, and she also worked on behalf of the American Red Cross, the Salvation Army, and particularly the United Service Organizations (USO).  Mrs. Alexander chaired the Religious Services Committee of the USO Club at Camp Plauche in the local area.  She and her husband, Sam Alexander, lived on Milan St., and later on Louis XIV St.

LaRC Manuscripts Collection 1087 holds the personal papers of Amelia Alexander, spanning the years 1939-1960.  (A posthumous paper documents the planting of a tree in Israel as a memorial in her honor.)   She collected her keepsakes and records relating to homeland work during World War II.  Included here are handwritten and typed correspondence, post cards, Christmas and Hanukah greeting cards, v-mails (a curious wartime technology), photographs and negatives, certificates, invitations and other items of social ephemera, a USO pin, reports, programs, bulletins, conference papers, newspaper clippings including several featuring her work in the New Orleans community, and other printed items.  She kept letters from her own sons as well as from other soldiers on active duty. 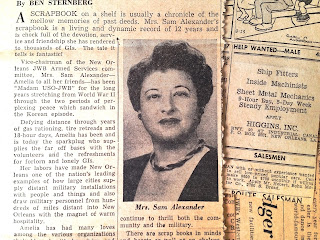 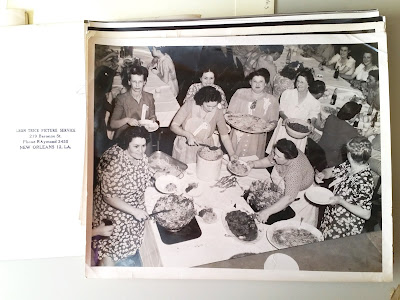 Several 8x10 glossy photographs in this collection were made by Leon Trice Picture Service.

Thanks once again to Samantha Bruner, for discovering and processing this collection for the benefit of researchers in American homeland war work, Jewish community service, and women's studies.

Captions: New Orleans Item front page, Tuesday, August 14, 1945, Extra; clipping describing the volunteer coordination and other charitable work of Amelia Alexander, a Leon Trice photograph depicting an event organized by Amelia Alexander (holding platter of spaghetti and looking up at the camera.)    All from Collection 1087, Box 1.    Images of items held in the Louisiana Research Collection may not be re-published without permission.