By Susanna Powers - May 18, 2015
Members of the Landrum and Eldredge families lived in Florida, Alabama, Louisiana, South Carolina and Texas in the nineteenth and twentieth centuries. The Hulse and Eldredge families lived in New Orleans in the twentieth century. Dr. C. A. Landrum (1838-1909) was a physician and dentist who operated drug stores in DeFuniak Springs and Milton, Fla. His wife was Mary Landrum. Their son, Lt. C. A. Landrum (d. 1964), served in World War I.

LaRC Manuscripts Collection 303, Landrum and Eldredge families papers, 1826-1960, contains personal, professional, and military papers of the Landrum and Eldredge and allied families in the southern United States. Included are handwritten and typed family correspondence, later-era notes and typed transcriptions of letters, genealogical information, speeches, certificates, leather-bound diaries, legal papers, real estate papers, financial documents, school papers, a drawing, photocopies of eighteenth-century maps, photographs, telegrams, invitations and other items of social ephemera, journal issues, newspaper clippings and other printed items. Included in the correspondence are Civil War letters of Lucius T. Landrum, and World War I letters of Cassimir A. Landrum from France to his mother, Mary, in Florida. The collection spans into the World War II era also, with a record of early 1940s blood donations to the American National Red Cross by Mrs. I. F. Eldredge of New Orleans, which states, "this certificate signifies that its possessor has rendered a patriotic service by giving his or her own blood for the treatment of the seriously injured."

Below is an undated letter written in France, probably mid-1918, by C. A. Landrum, 2nd Lieut., to his mother in northern Florida. 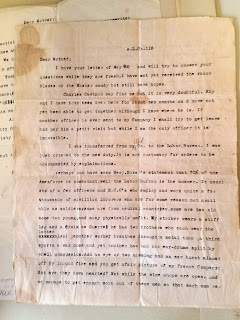 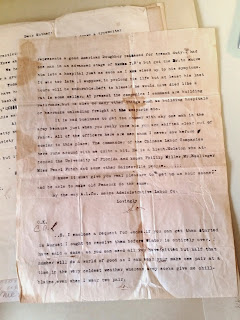 A.L.Co. 118
Dear Mother;
I have your letter of May 20 and will try to answer your questions while they are fresh.  I have not yet received the razor blades or the Easter candy but still have hopes.
Charles Cawthon may find me but it is very doubtful.  Ely and I have both been over here for about ten months and have not yet been able to get together although I know where he is.  If another officer is ever sent to my Company I shall try to get leave and pay him a petit visit but while I am the only officer it is impossible.
I was transferred from my old Co. to the Labor Bureau.  I was just ordered to the new duty.  It is not customary for orders to be accompanied by explainations.
Perhaps you have seen Secy. Baker's statement that 70% of the Amexforce is combatant; well the Labor Bureau is the answer.  It consists of a few officers and N.C.O's who employ and work quite a few thousands of civillian laborers who are for some reason not available as soldiers; some are from neutral countries, some are too old some too young, and many physically unfit.  My striker wears a stiff leg and a Croix de Guerre (he has two brothers who each wear the latter also); another worker breathes through a metal tube, a third sports a wax nose and yet another has had his ear-drums split by shell concussion.  Add an eye or two missing and an ear burnt almost off by liquid fire and you get a fair picture of my French Company.  But are they down hearted?  Not while the wine shops are open.  And we manage to get enough work out of these men so that each one represents a good American Doughboy released for trench duty.  I had one man in an advanced stage of T.B's but got the Dr. to shove him into a hospital just as soon as I wised up to his symptoms.  It was too late, I suppose, to prolong his life but at least his last hours will be endurable.  Left to himself he would have died like a rat in some sellar.  At present the companies I command are building railroads, but we also do many other things such as building hospitals or barracks unloading freight at the seaports etc.
It is bad business to get too chummy with any one man in the army because just when you realy know him you are shifted clear out of range.  All of the officers here are men whom I never saw before coming to this place;  The commander of the Chinese Labor Companies here runs around with me quite a bit.  He is a Lieut. Holston who attended the University of Florida and knows Phillip Miller, Mr. Esslinger, Miss Pearl Futch and some other Gainesville people.
I know it must give you real pleasure to get up an hour sooner and be able to make old Peacock do the same.
By the way A.L.Co. means Administrative Labor Co.
Lovingly,
Son
O.K.
C.A.L.
P.S. I enclose a request for socks.  If you can get them started in August I ought to receive them before Winter is entirely over.  I have said a dozen so you can send all you have knitted but half that number will do a world of good as I can wear your make, one pair at a time, in the very coldest weather, whereas, army socks give me chill-blains, even when I wear two pair.
Son


Caption: undated letter written in France, probably mid-1918, by C. A. Landrum, 2nd Lieut., to his mother in northern Florida.    Manuscripts Collection 303, Box 5, [folder 20].   Images of items held in the Louisiana Research Collection may not be re-published without permission.