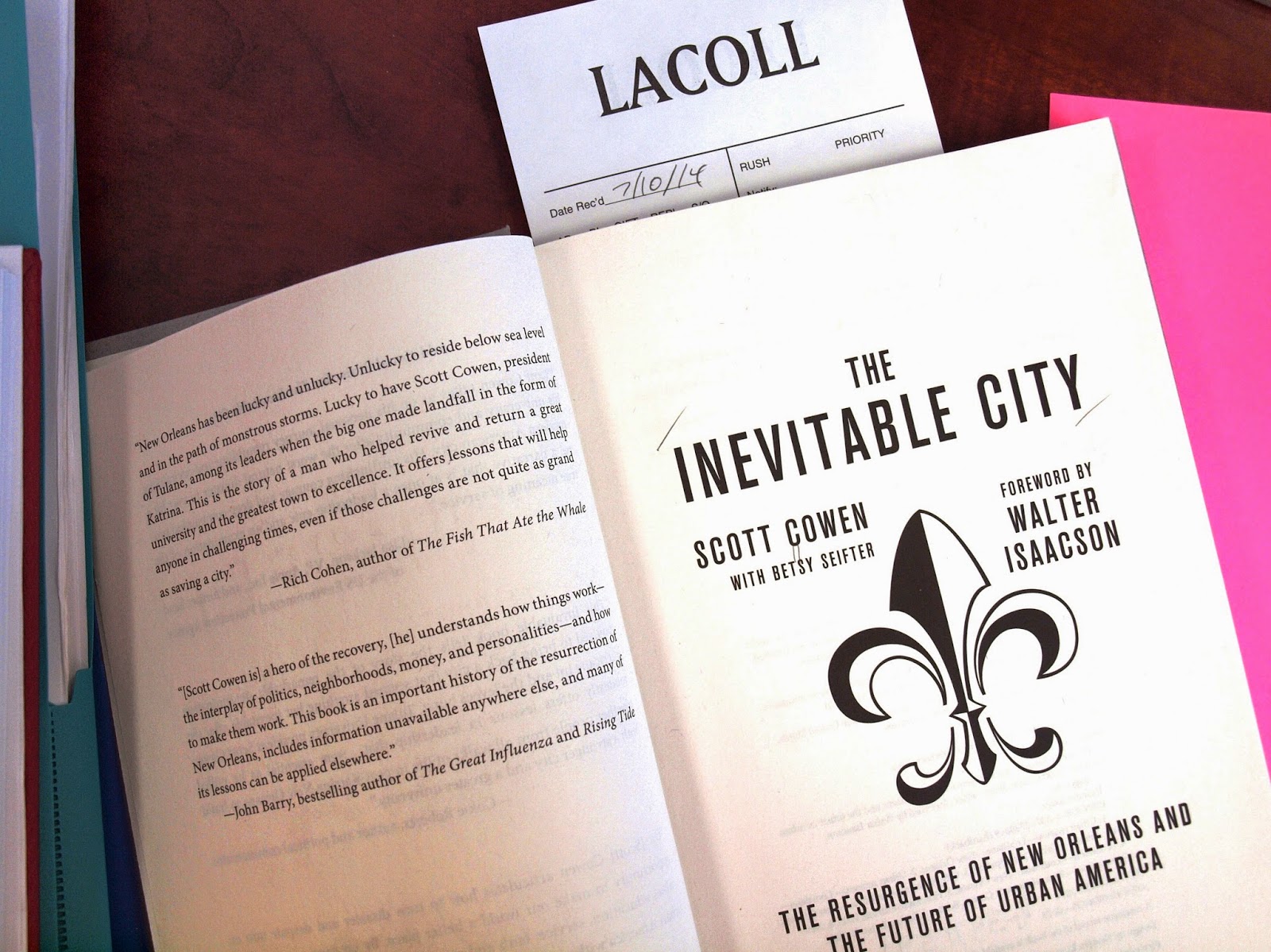 August is Katrina Month in New Orleans.   August 29, 2014, will mark the ninth anniversary of the storm, the flood, and one of the worst disasters in American history.

Creative and informative writing on Katrina continues to be published and collected by the library, and especially by the Louisiana Research Collection.   Recently-retired Tulane University president Scott Cowen has written a scholarly memoir of his presidency which strongly focuses on the disaster and continuing recovery of the university and the city.   Copies are held in the main Howard-Tilton stacks as well as in LaRC:

Rather than simply taking credit for his own personal leadership during the aftermath of the storm,  Scott Cowen carefully describes a wide variety of examples of individuals and groups who contributed to the direction of recovery.  He doesn’t rewrite the painful and divisive conditions of the 2005/2006.

“In my seven pre-Katrina years in New Orleans, I was, in a way, a tourist.  But since Katrina, I feel more like I’m “from here.”  I’ve become engaged with everything New Orleans—the music, the food, the artists, the history; the hurricane parties, the Mardi Gras floats, the smell of jasmine, the glitter of the river.  I’ve met remarkable people, like the late Jefferson Parish sheriff Harry Lee, who figured out how to get Tulane’s database files out of a downtown building when the city was under martial law, and like Quint Davis, the mastermind and producer of the New Orleans Jazz and Heritage Festival, who almost singlehandedly brought the city’s music—everything from the Mardi Gras Indians’ chants to Professor Longhair’s blues—to national prominence.  And then there’s Bob Breland, my regular cabdriver, whose colorful turns of phrase, careening sense of humor, and encyclopedic mind for city detail remind me of Ignatius from John Kennedy Toole’s A Confederacy of Dunces.” –p.10-11.

“It’s tempting to blame everything on Ray, but circumstances shape things more than we like to think.  The troubled racial history of the town inevitably surfaced after Katrina, and if it hadn’t been Ray with his chocolate city speech, it would undoubtedly have been someone else stirring the pot.  At the same time, character matters.  Leadership matters.  Our job as civic leaders was to work with the difficult realities, including the realities of racial distrust, political dissension, and the traumatic effects of loss and dislocation.” – p. 38.

“Urban revitalization requires leaders, both direct and indirect, who are committed to both the daily grind and the visionary goal.  In the end, the resurgence of New Orleans is the result of people who took responsibility and took charge, of leaders from all over who did the work and found the means to achieve what looked like an impossible goal.  And once again in its long, dramatic history, New Orleans has proved itself to be the inevitable city.”   –p. 217.