Civil Rights and the First Unitarian Church of New Orleans

By Room 202 - May 21, 2014
The Louisiana Research Collection has recently acquired the records of the First Unitarian Church of New Orleans. Among First Church’s records are the papers of Reverend Albert D’Orlando, who was a vocal Civil Rights activist in the 1960s. Reverend D’Orlando was especially active in the fight for the integration of New Orleans public schools. Below is a letter co-authored by Rev. D’Orlando and Charles Foster, the president of the church’s Board of Trustees, which describes the church’s the efforts  to support the families of children attending integrated schools, as well as teachers and protesters during this turbulent period in New Orleans’s history. 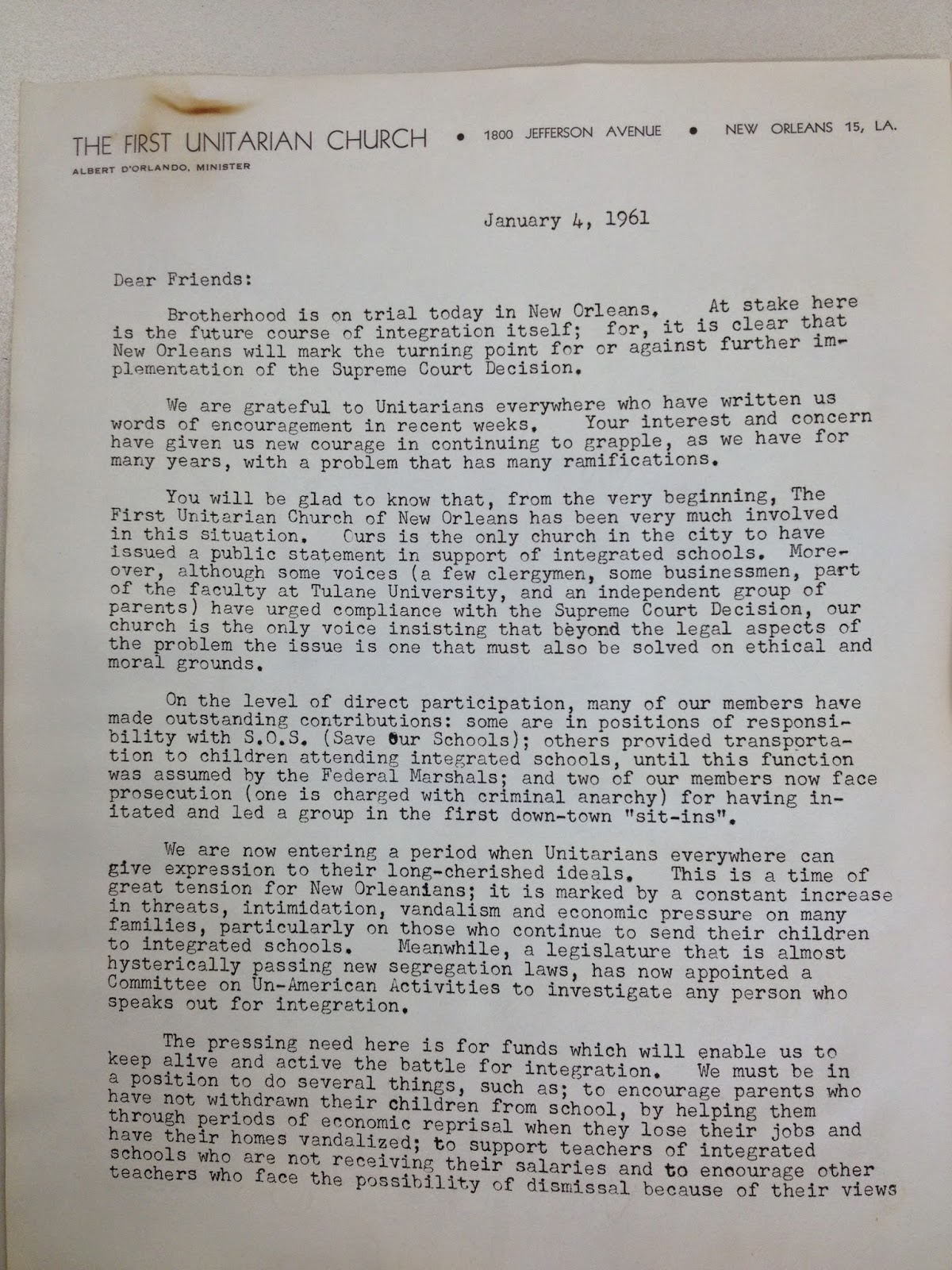 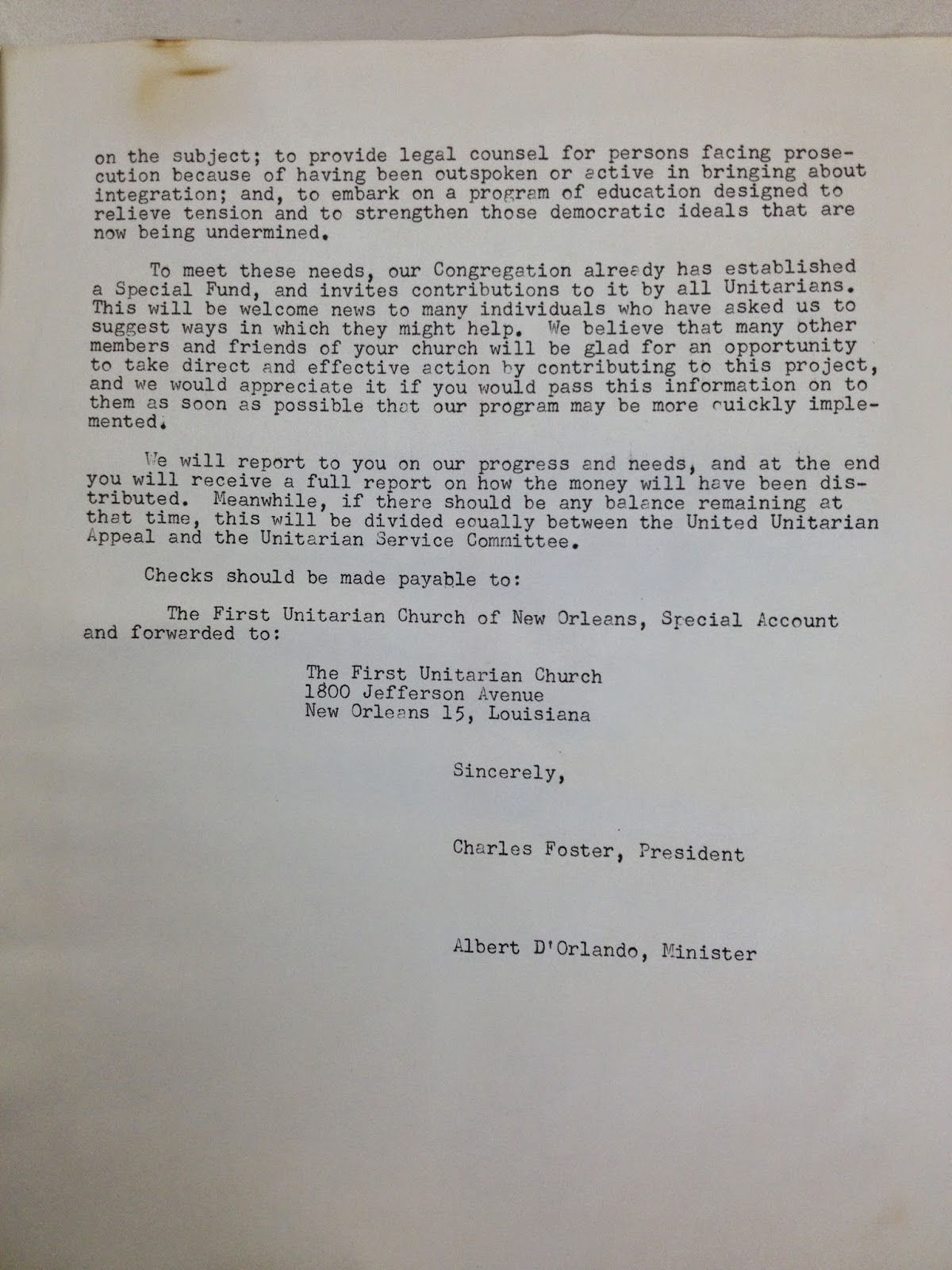 Transcription
January 4, 1961
Dear Friends,
Brotherhood itself is on trial today in New Orleans. At stake here is the future course of integration itself; for, it is clear that New Orleans will mark the turning point for or against further implementation of the Supreme Court Decision.
We are grateful to Unitarians everywhere who have written us words of encouragement in recent weeks. Your interest and concern have given us new courage in continuing to grapple as we have for many years, with a problem that has many ramifications.
You will be glad to know that from the very beginning, The First Unitarian Church of  New Orleans has been very much involved in this situation. Ours is the only church in the city to have issued a public statement in support of integrated schools. Moreover, although some voices (a few clergymen, some businessmen, part of the faculty at Tulane University, and an independent group of parents) have urge d compliance with the Supreme Court Decision, our church is the only voice insisting that beyond the legal aspects of the problem the issue is one that must also be solved on ethical and moral grounds.
On the level of direct participation, many of our members have made outstanding contributions: some are in positions of responsibility with the S.O.S. (Save Our Schools); others provided transportation to children attending integrated schools, until this function was assumed by the Federal Marshalls; and two of our members now face prosecution (one is charged with criminal anarchy) for having initiated and led a group in the first down-town “sit-ins”.
We are now entering a period when Unitarians everywhere can give expression to their long cherished ideals. This is a time of great tension for New Orleanians; it is marked by a constant increase in threats, intimidation, vandalism and economic pressure on many families, particularly on those who continue to send their children to integrated schools. Meanwhile, a legislature that is almost hysterically passing new segregation was, has now appointed a Committee on Un-American Activities to investigate any person who speaks out for integration.
The pressing need here is for funds which will enable us to keep alive and active the battle for integration. We must be in a position to do several things, such as; to encourage parents who have not withdrawn their children from school, by helping them through periods of economic reprisal when they lose their jobs and have their homes vandalized; to support teachers of integrated schools who are not receiving their salaries and to encourage other teachers who face the possibility of dismissal because of their views on the subject; to provide legal counsel for persons facing prosecution because of having been outspoken or active in bringing about integration; and, to embark on a program of education designed to relieve tension and to strengthen those democratic ideals that are now being undermined.
To meet these needs, our Congregation already has established a Special Fund, and invites contributions to it by all Unitarians. This will be welcome news to many individuals who have asked us to suggest ways in which they might help. We believe that many other members and friends of your church will be glad for an opportunity to take direct and effective action by contributing to this project, and we would appreciate it if you would pass this information on to them as soon as possible that our progress may be more quickly implemented.
We will report to you on our progress and needs, and at the end you will receive a full report on how the money will have been distributed.  Meanwhile if there should be any balance remaining at that time, this will be divided equally between the United Unitarian Appeal and the Unitarian Service Committee.
. . . .
Sincerely,
Charles Foster, President
Albert D’Orlando, Minister

A small portion of the First Church’s records are currently available for research. The finding aid can be viewed here. The remainder of the collection will be available within the next 2-3 months, after it has been fully processed.