The 1940 census shows that Richard Ferchaud (1919-2003) of New Orleans lived with his older sister Marguerite Ferchaud (1909-1988) at 1933 Cambronne St., where she received his many letters written while in the Army during World War II.    Lt. Ferchaud served in the 3rd Armored Division's 703rd Tank Destroyer Battalion.   He was seriously wounded in France in 1944, and received a Purple Heart.  He recovered and resumed active military service.

Richard Ferchaud's correspondence to his sister back home is conversational and lighthearted.  Quite a few of the messages are in the form of "V-Mails", or “V-Letters”, a format involving photostatic reductions of handwritten notes.  Although injured himself, he expressed himself in an upbeat manner, even when describing his boredom.

Richard Ferchaud Papers (LaRC Manuscripts Collection 167) will be a useful resource for researchers with an interest in World War II and the social styles of mid-twentieth century America.   As with most archival collections of wartime letters, sentiments of affection and courage are carefully preserved. 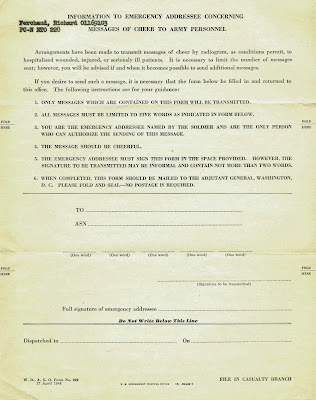 Captions:  August 1944 telegram sent to Marguerite Ferchaud in New Orleans, informing her of her youngest brother’s injury in France; “Messages of cheer to Army personnel” form requesting that the soldier’s emergency addressee send a five-word message of cheer to the wounded soldier.  Images of items in the Louisiana Research Collection may not be republished without permission.