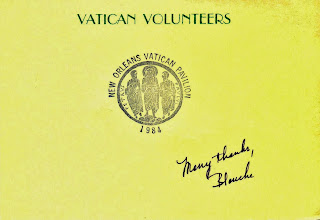 The twentieth-century World’s Fair in New Orleans had its troubles, but it was certainly enjoyed by many visitors and local residents from May 12-Nov. 11, 1984.   Some of the buildings constructed for the event still stand and have been used for various purposes since that time.  A number of books about the 1984 World’s Fair are held in the Howard-Tilton Memorial Library.  One of the highlights of the fair was the New Orleans Vatican Pavilion with its memorable fine art exhibition; its official catalog was published as Treasures of the Vatican, which is in LaRC with the call number: N 6920 .T7 1984 LACOLL.

The Vatican Pavilion was a 15,000 square foot building located on the eighty-acre site of the Louisiana World Exposition, held in downtown New Orleans. The art exhibit within the Pavilion was jointly sponsored by the Archdiocese of New Orleans and the New Orleans Museum of Art.  It included religiously-themed works by the artists Caravaggio, Raphael, El Greco, Giotto, Matisse, Rouault, de la Tour, and Dali.

New Orleans native, Blanche Mouledoux Comiskey, also known as Mrs. James A. Comiskey, was in charge of planning and organizing the volunteers' orientation, parking, scheduling, dress, conduct, and overall participation in the event.   Her job title was Volunteer Coordinator.  She retained her records relating to this project and later donated them to Tulane University.

Manuscripts Collection 981 is named Blanche M. Comiskey records of the Louisiana World Exposition, 1983-1984.  This collection consists of items primarily concerning the planning process for the running of the New Orleans Vatican Pavilion, specifically the volunteers' activities and responsibilities. Included are handwritten and typed correspondence, post cards, greeting cards, notes, lists of invitees, schedules, financial documents, blank stationery, pieces of interfacing cloth printed with the Pavilion's logo, smaller swatches of cloth selected for the uniforms, color drawings of uniform designs of a vest for volunteers and an elaborate costume shirt for supervisors, a certificate, photographs, a list of the exhibited artworks, maps, floor plans, a brochure, a souvenir program and other printed items.

One of the letters from a volunteer is a letter of resignation.  Her stated reason was that she had not been aware that evangelizing would be prohibited while serving in the Pavilion. 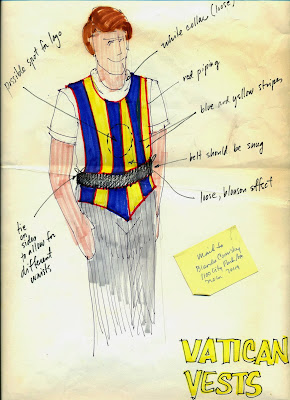 Captions: a post card featuring the logo of the New Orleans Vatican Pavilion, signed by Mrs. Comiskey; a colorful costume/uniform design drawing, depicting the vest for volunteers.   Images of items in LaRC archival collections may not be re-published without permission.