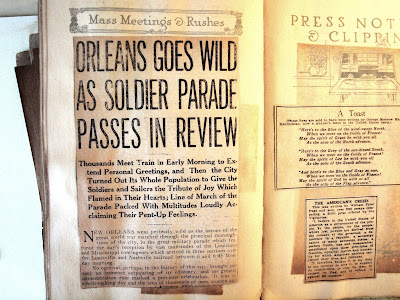 Claire Strauss was a student at Sophie B. Wright High School in New Orleans, during the nineteen-teens.   Her scrapbook of high school life is part of the Claire Strauss Meyer Papers, 1909-1920s, LaRC Manuscripts Collection 870.   Alongside invitations to baby showers and school papers, she kept memorabilia of the times relating to America’s involvement in World War I.

This young girl’s unusual scrapbook includes mounted and loose papers and other objects such as numerous formal photographs, handwritten correspondence, drawings, dried pieces of plants and flowers and other keepsakes, a small mirror, a fur sample, wood samples, crystals from chemistry class, report cards, a prayer card from the Religious School of Congregation Temple Sinai, a spoon, a certificate, postcards, advertisements, World War I era buttons and patches, ribbons, flags, newspaper clippings and other small locally printed items, an invitation and program of her June 12, 1919, graduation ceremony, and high school graduation autographs.  The preprinted volume’s cover title is “a girl’s commencement, rosebud memories.” 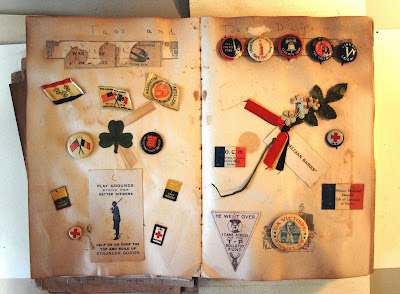 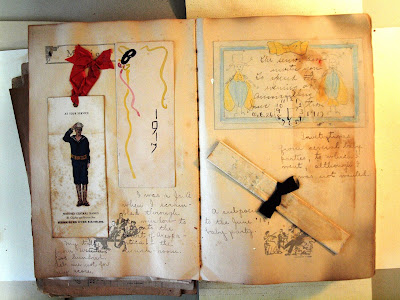 In honor of Memorial Day, the Schiro Reading Room will be closed Saturday-Monday, May 25-27, 2013.

Caption: Photographs of scrapbook pages, featuring the headline on the New Orleans States, v. 39, no. 118, Monday  April 28, 1919: “ORLEANS GOES WILD AS SOLDIER PARADE PASSES IN REVIEW, Thousands Meet Train in Early Morning to Extend Personal Greetings, and Then the City Turned Out Its Whole Population to Give the Soldiers and Sailors the Tribute of Joy Which Flamed in Their Hearts; Line of March of the Parade Packed With Multitudes Loudly Acclaiming Their Pent-Up Feelings.”