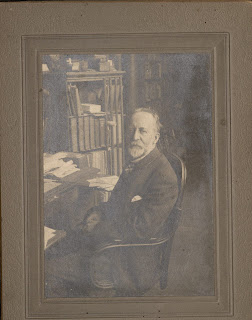 William Beer was librarian of Tulane's Howard Library and the first librarian of the New Orleans Public Library.  Originally from England, New Orleans became his permanent home as he spent his life travelling the world acquiring rare books and manuscripts for the library.  Through his efforts, the library became a leading repository of rare books, maps and manuscripts.  These materials can still be found in Tulane's Louisiana Research Collection.  Beer played an integral role in the opening of the first free and public library in New Orleans, the New Orleans Public Library.  He acted as both director and librarian of NOPL from 1896-1906.  In addition to his role at the public library, Beer kept his position as the librarian of the Howard Library.

Special thanks to our intern, Remesia Shields, who created the William Beer finding aid, and helped write this post.