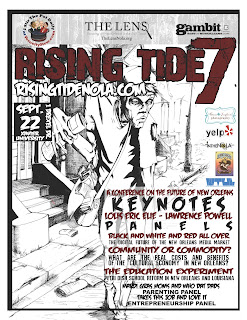 The 7th Rising Tide conference will be held on Saturday, September 22, 2012 on the campus of Xavier University, New Orleans.   The organizers describe this annual event as “a conference on the future of New Orleans” and a “day-long program of speakers and presentations … tailored to inform, entertain, enrage and inspire.”  This unique gathering began in 2006 as a post-Katrina New Orleans bloggers’ advocacy group, and has now grown into a larger-scale, upbeat blend of an academic symposium and a Louisiana festival.

The first keynote speaker this year will be well-known scholarly author and activist Lawrence N. Powell, with “The Accidental History of an Accidental Book.”   Dr. Powell is an Emeritus Professor of History at Tulane University, and a familiar face in Special Collections.   The previous year's first keynote speaker was another noted Tulane author and geographer, Richard Campanella, who delivered a lively presentation about New Orleans neighborhoods.

Take This Job and Love It: Owning Your Own Business in NOLA, moderated by Victoria Adams.

Neighborhoods: Shake For Ya ‘Hood (If It’s All Good), on the role of neighborhood associations in New Orleans.

After lunchtime, the second keynote speaker will be New Orleans-based writer and filmmaker, Lolis Eric Elie, whose talk is titled “At War With Ourselves: New Orleans Culture at the Crossroads … Again … And Again …  And …”

This is followed by panel discussions:

Mardi Gras Moms and Who Dat Dads – A Discussion on Parenting in New Orleans, moderated by Bart Everson.

Black and White and Red All Over – The Digital Future of the New Orleans Media Market, moderated by Peter Athas.