Louis Gilmore and a love poem 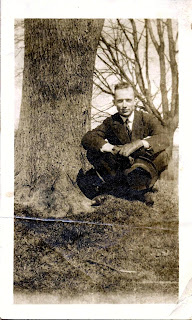 Twentieth-century New Orleans poet Louis Gilmore (1891-1972) was the son of city attorney and U.S. congressman Samuel Louis Gilmore (1859-1910), and the brother of Martha Gilmore Robinson.  Born in New Orleans, he attended college at Columbia University, and then served in the Army during World War I.   Back home, his primary professional interest became literary writing.  He also translated from French literature, and worked as an editor at The Double Dealer, a literary monthly published in New Orleans in the 1920s.  The name he chose to use on publications was Louis Gilmore, but in letters, his friends and family would call him Sam.

LaRC Manuscripts Collection 695, formally titled Samuel Louis Gilmore, Jr. papers, 1909-1996, consists of the personal and literary papers of Louis Gilmore, and it contrasts sharply with our collection relating to his father (Collection 618), both being centered in New Orleans, but of importantly different generations and circles.

Gilmore's 1959 compilation of his own published poems, combined with his selected translations of Baudelaire, Vine Leaves and Flowers of Evil, is held in multiple locations within the library; there are two copies of it available in the Louisiana Research Collection (PS 3513 .I6365 V5 LACOLL).    He continued publishing new work through the year of his death, such as the six poems appearing in the Feb. 1972 issue of Poetry (v. 119, no. 5), available through JSTOR. 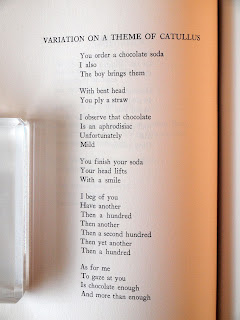 Captions:  photograph of Louis Gilmore in 1914 (695-1-14); p. 30 of Vine Leaves and Flowers of Evil, featuring his poem, “Variation on a Theme of Catullus.”
Posted by Susanna Powers