Paul Conrad (b. 1840) was a New Orleans businessman who served as a Confederate soldier. He had been shot in the left shoulder in battle during the Civil War, but remained active in the Louisiana Field Artillery into the 1870s.  As a rule, in the post-war South, Confederate veterans were held in especially high regard, and Louisiana Governor S. B. Packard commissioned Conrad as Captain in his "Governor's Life Guard." Paul Conrad became an employee of the Louisiana State Lottery Company in 1870, becoming its president in 1890. Subsequently, the United States Congress banned the interstate transportation of lottery tickets and lottery advertisements. As a result, the company remained in Louisiana until its charter expired; Conrad moved its operations to Honduras where it was shut down in 1907. 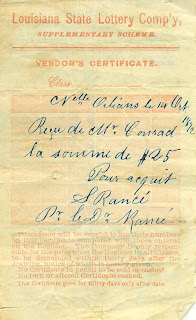 LaRC Manuscripts Collection 463 consists of personal and business papers of Paul Conrad, with numerous artifacts of the 19th century Louisiana lottery. Included are handwritten correspondence, financial documents including medical receipts, insurance policies, architectural plans for a cottage by the beach in Waveland, military letters and certificates, a photograph, a printed lottery ticket, a partially printed lottery vendor's certificate, an invitation to the Crescent Club, social ephemera such as calling cards, clippings and other printed items. Correspondents include various individuals, including General Jubal A. Early, who helped supervise the lottery drawings; some of the letters concern military and veterans' affairs.

A related item is a small booklet in the Louisiana Research Collection titled, Tips [a poem], published in 1891 (its call number is: 976.3 (174.6) T595 LACOLL).  On the back of the illustrated comedic poem is Paul Conrad’s advertisement encouraging readers to purchase lottery tickets for the drawing on Tuesday, December 15th, 1891, in which “Two Millions of money will be distributed…” 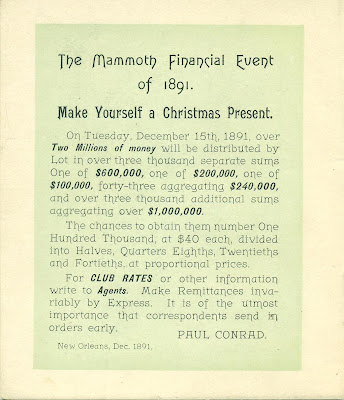 In 2012, Louisiana has lottery drawings through the Louisiana Lottery Corporation, which traces its historical timeline back to 1990. 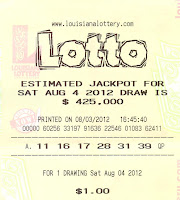 Captions: an 1892 Louisiana State Lottery Company presumably losing lottery ticket (463-1-5); an 1872 vendor’s certificate (463-1-1) ; Paul Conrad’s advertisement for The Mammoth Financial Event of 1891, on the back of the cataloged booklet, Tips; an Aug. 4, 2012 losing ticket in the Lotto, possibly destined for the LaRC ephemera file.  Images may not be re-published without permission.