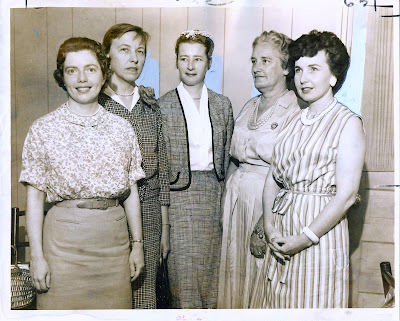 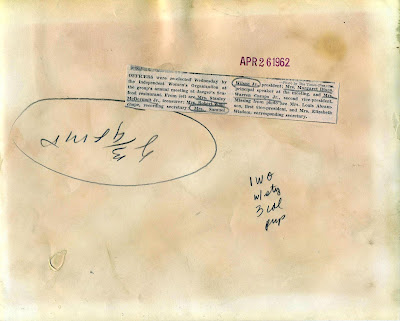 Most of LaRC’s archival collections fall into three basic types-- personal papers, family papers, and organizational records.   But the Ellen Elizabeth Latrobe Wilson Papers (Manuscripts Collection 943) is eclectic and blends elements of all three.   The items in this collection came into existence from 1835-1991, with most of them dating from the 1940s to the 1960s.

Ellen Elizabeth Latrobe Wilson (1919-1991) was born and raised in Baltimore, Md., and later lived in New Orleans for forty years. She was a descendant of Benjamin Henry Latrobe (1764-1820), the noted architect of the United States capitol, and was married to New Orleans architect Samuel Wilson, Jr. (1911-1993). She served in the Navy during the World War II era. She later became a leader in New Orleans community groups, most prominently as president of the Independent Women's Organization, with interest and involvement in the political issues of the day.

Manuscripts Collection 943 consists of personal, military, and professional papers of Ellen Wilson.  To use the old-fashioned expression, she was often referred to as Mrs. Samuel Wilson.  The collection also contains the Latrobe family papers she had in her possession.  The family papers center around Virginia Latrobe, including such papers as an American passport and French driver’s permit and travel identification papers from the 1920s, but some of the personal handwritten and printed documents had been in the family since 1835.

The overall collection includes typed and handwritten correspondence, notes, photographs, social stationery and business cards, travel diaries, passports, a large fragile scrapbook of mounted mid-twentieth-century newspaper clippings, and other printed items. The clippings in the scrapbook are mostly about political, gender, and racial issues in New Orleans, apparently of interest to Ellen Wilson herself, and to the Independent Women’s Organization.  The clippings feature stories about politicians including Chep Morrison, Sam Jones and others. Also included are organizational records of the I.W.O. in New Orleans, such as business correspondence, minutes, election information, press releases, photographs of events, and membership documents.  Mrs. Wilson also participated in other groups in town, including the Children's Bureau, the Fashion Group of New Orleans, and St. Mary's Dominican College Associates.

The use of the husband’s name to identify his wife was in widespread and common practice well into the twentieth century in the United States, not just as a formality on invitations.  As women came to be usually known by their own names, it is fitting that by 1991, the headline on her obituary calls her “Ellen Wilson”--particularly appropriate for a socially-conscious feminist. 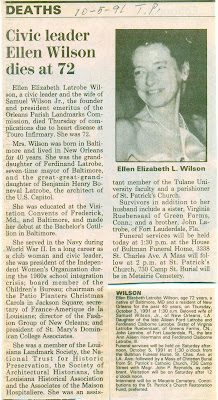 Captions: Photograph of officers of the Independent Women's Organization at the group's 1962 annual meeting at Jaeger's Seafood Restaurant in New Orleans. (Mrs. Samuel Wilson, Jr., center); verso of photograph with newspaper clipping listing all the women by their husbands' names; Ellen Wilson's 1991 obituary.