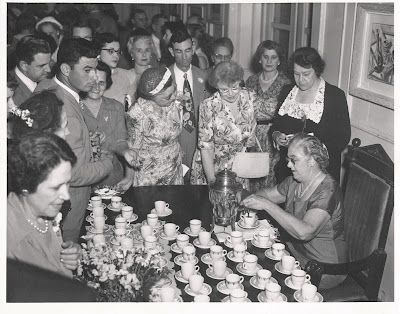 New Orleans has a rich tradition of locally creating and producing theatrical performances.  The Louisiana Research Collection has holdings of various types which document the work and life of these theater groups, including archival collections, books, and ephemera.    Two of these archival collections are Group Theatre records, 1926-1938 (Manuscripts Collection 80) and Le Petit Theatre records, 1919-1966 (Manuscripts Collection 368).

The Group Theatre of New Orleans was a nonprofit community project active during the 1920s and 1930s which was "dedicated to the principle of experiment in all branches of the theatre arts." Productions were presented at Newcomb College and other venues, and included a wide range of classic, modern, local, and foreign works.  The Studio provided instruction to those interested in acting, directing, and the technical side of the theater.    This collection consists of organizational and related records of the Group Theatre of New Orleans.  Included are correspondence, financial documents, lists of participants and subscribers, newspaper clippings, tickets, programs, prompt scripts, photographs, and a report.   Programs are for productions by the Children's Theater Guild, Experimental Theatre, Modern Film Society of New Orleans, and Le Petit Theatre.

The Drawing Room Players, formed in 1916, renamed their group Le Petit Theatre in 1919.   Beginning in 1922, the group purchased and performed at the historic building at 616 St. Peter St. in New Orleans.   Le Petit Theatre was located there continuously throughout the rest of the twentieth century and into the twenty-first.   The group associated with the theater held acting workshops, and was also known as New Orleans Little Theatre Productions, Inc.  This collection consists of organizational records and other items collected by members of Le Petit Theatre du Vieux Carre.  Included are the organization's bylaws and charter, legal and financial documents, leases, typed and handwritten correspondence, post cards, greeting cards, programs, a 1925 floor plan, minutes of meetings, subscriber lists, issues of the Sounding board newsletter, sheet music, photographs, press releases, publicity papers, booklets, newspaper clippings and other printed items.  Photographic subjects include actors in performance, members, audiences during performances and in intermission, the switchboard, buildings, and the courtyard.  Correspondents include Louisiana poet Amy Boudreau.  Le Petit Theatre has been affiliated over the years with Newcomb College and Tulane University.   Financial problems caused cancellation of their 2010-2011 season; in 2012, plans are in place for re-opening in 2013.  See this article in nola.com, 6/28/12, “Actor Bryan Batt describes the 2013 reopening of Le Petit Theatre.”   Bryan Batt is the author of She Ain’t Heavy, She’s My Mother (PN  2287 .B387 A3 2010 LACOLL)