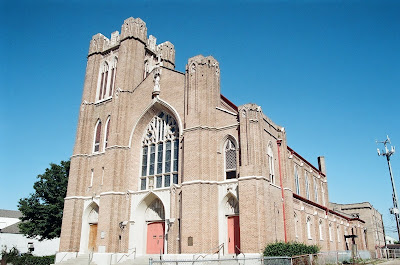 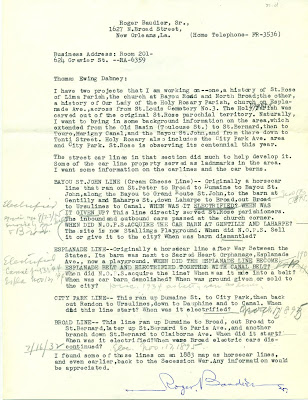 In 1957, when Roger Baudier was preparing a book in commemoration of the centennial of St. Rose of Lima Parish, he wanted to “bring in some background information on the area.” He wrote a letter to New Orleans Public Service, Inc. (NOPSI) asking specific questions about the history of horsecars, electrified street-car lines, car barns, and any public transportation serving the church located on Bayou Road near North Broad, over the previous one hundred years.

This typed letter is located in LaRC’s Manuscripts Collection 229, the Thomas Ewing Dabney papers, 1833-1969. Thomas Dabney (1885-1969), known primarily as a journalist, was working during the 1950s as a researcher and writer in public relations with NOPSI. (Some readers may know that those were the days when NOPSI was something more than just a utility company… when a problem came up, people would “call Public Service!”) Although we don't hold the return correspondence from Mr. Dabney to Mr. Baudier, Thomas Dabney had pencilled in some of the answers on the original letter, about his research into the dates of changes in lines and barns.

Roger Baudier's resulting, richly written monograph, Centennial St. Rose of Lima Parish, New Orleans, La : a parish history, is available in LaRC with call number: BX 4603 .N46 S67 1957 LACOLL. This concise history, centering on the buildings, leaders, and parishioners of St. Rose of Lima Catholic Church, affectionately touches on some of the triumphs and tragedies of the city of New Orleans. 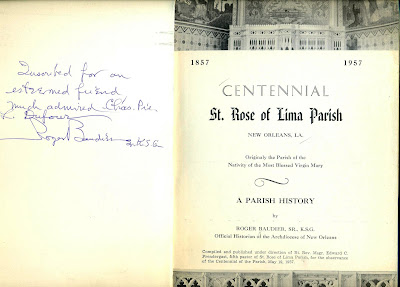 Note also the inscription on the inside cover of this book, from Roger Baudier to Charles L. "Pie" Dufour (whose papers are in LaRC's Manuscripts Collection 90).

In the twenty-first century, the buildings at the former parish site are not being used for religious services. The surrounding neighborhood is thriving several years after damage by Hurricane Katrina and the flood. Plans are being made to redevelop the site at 2545 Bayou Road, to be called the “Bayou Treme Center.” In the Clarion Herald, Nov. 9, 2011, the plans are described in “New life being breathed into St. Rose de Lima site.” See also the web site of St. Rose de Lima, New Orleans.

Post and photograph of St. Rose de Lima church building by Susanna Powers (photograph c2009 in angels and people, life in New Orleans) The image of the letter from LaRC's Manuscripts Collection 229 may not be re-published without permission.