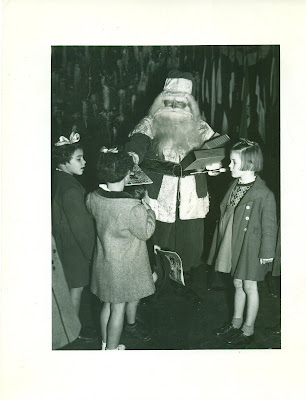 The Young Men's Business Club of New Orleans was formed in 1919 by a group of servicemen returning home to New Orleans. It was somewhat similar to chambers of commerce, but remained autonomous and very active, and over the years became more diverse than its name might indicate.

This archival collection (Manuscripts Collection 414) consists of over five hundred black and white photographs of people and events associated with the Young Men's Business Club of New Orleans, and also contains newspaper clippings and post cards. The photographs range from formal studio portraits of individuals, to group photographs at social events, to amateur Polaroids and prints developed at local K&B drug stores.

Caption: one of the hundreds of photographs from Collection 414, featuring a candid scene at a holiday event sponsored by the Young Men’s Business Club. This particular shot is undated, but generally the photographs in this collection are clearly identified and dated. May not be reproduced without permission.