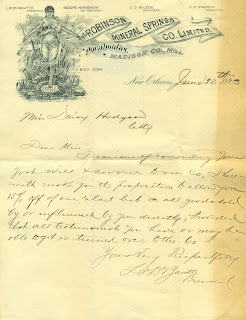 Daisy Hodgson of New Orleans served as recording secretary for the Confederated Southern Memorial Association. She lived on Jackson Avenue, during the late nineteenth and early twentieth centuries. Other than these facts, we know very little about the person whose papers we hold in the Louisiana Research Collection, as Manuscripts Collection 44. This is a small collection which will be of interest to students of American history for at least two reasons—the documentation of a time when there was a common nostalgia in the South about the lost Confederate cause, and additionally because of information about the existence of a bottled mineral water business at that time, in New Orleans, and in Pocahontas, Mississippi.

The collection includes correspondence, social stationery, invitations, newspaper clippings and other printed items including event ephemera, pamphlets, programs, and post cards. The segment of the collection about the bottled water business consists of handwritten letters from the company, including one from L. P. deBautte, president of the Robinson Mineral Springs Company, to Daisy Hodgson in New Orleans. In one of the letters, a discount is offered in exchange for testimonials, presumably about the healing powers of their spring water. The stationery bears an elaborate engraving depicting the maiden Pocahontas walking on floating water lilies. 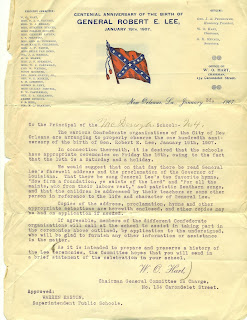 Captions: June 20, 1893 handwritten letter to Miss Daisy Hodgson from the Robinson Mineral Springs Co. Limited; Jan. 3, 1907 typed letter to the principal of the McDonogh School, No. 4, in New Orleans, from W. O. Hart, in regard to the planning for the centennial of the birth of Robert E. Lee, later that month. Images may not be reproduced without permission.