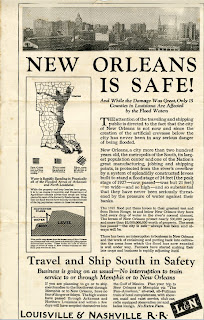 The springtime 1927 flood of the lower Mississippi River is considered the most destructive river flood in the history of the United States. It resulted in lengthy displacement of populations living in Louisiana, including many families of enrolled Tulane University students. Local, state, and national agencies reacted with relief efforts, and there was consideration of future disaster preparedness and also the engineering management of the river. An advertisement proclaiming, "New Orleans is safe!" was published by the L. & N. Railroad to encourage continued tourism to New Orleans after the waters receded from low-lying areas of Louisiana. According to this poster, "The levees of New Orleans protect nearly 500,000 people ... The crest has passed--the city is safe--always has been and always will be."
Manuscripts Collection 517 contains official correspondence, charts, maps, a telegram, a public relations poster, a conference invitation, newspaper clippings and contemporary printed items relating to the Great Mississippi Flood of 1927, and the earlier flood of 1922, which were collected by Tulane University president, Dr. A. B. Dinwiddie. Albert Bledsoe Dinwiddie (1871-1935) was president of the University from 1918 to 1935.
To monitor the present flooding along the Mississippi River, see the NOAA National Weather Service updates.


Caption: Printed public-relations poster, distributed in 27 newspapers nationally by the L. & N. Railroad in 1927. It was also mailed to “New Orleans’ leading citizens” including Tulane University president, Dr. A. B. Dinwiddie, who compiled these papers, now Manuscripts Collection 517 in the Louisiana Research Collection.