Letters to and from Louisiana 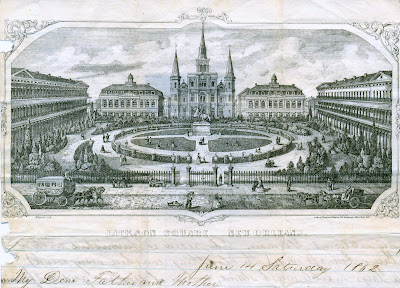 Soldiers’ letters contain unintentional, first-hand accounts of military history, and they have great power and authenticity even when the authors are not in any way famous. They may range in style from the conversational to the formal, and may be clearly handwritten or composed in a nearly illegible, ornate fashion. Here are a few of the archival collections among LaRC’s holdings which contain original letters of the Civil War era.

• USA: Alfred A. Parmenter papers, 1861-1862, 1962-1963. Manuscripts Collection 690. This collection consists of the Civil War correspondence of Union soldier, Alfred A. Parmenter. Twentieth-century typed transcriptions accompany most of the letters. Also included are biographical research notes, printed material, and copies of official certificates produced in the 1960s, concerning Parmenter and his regiment. Alfred A. Parmenter (1836-1880) was a musician in the 26th Regiment, Massachusetts Voluntary Infantry. His parents were Horace and Betsey Parmenter of Lowell, Mass. The Union regiment participated in General Butler's expedition on the Gulf Coast and against New Orleans. Parmenter was stationed in New Orleans in the summer of 1862. He married Letitia M. Fillmore of Lowell, who was born in Nova Scotia, in July 1863. His occupation is listed on different forms as teacher, machinist, and stitcher. Alfred A. Parmenter died in Lynn, Mass., on June 22, 1880, of apoplexy.

• USA: Ambert O. Remington papers, 1861-1863. Manuscripts Collection 89. This collection primarily consists of over fifty handwritten wartime letters, both those written by Union soldier Ambert Remington, as well as those he received from home. Also included is his certificate of promotion to corporal in Feb. 1863. Some of his correspondence is on stationery with color-printed patriotic images and sayings. Stamped, postmarked envelopes are also included in the collection. The letters from Ambert Remington to his parents are unusually legible and informal for the era. Ambert O. Remington (1842-1863) came from a farming family near Auburn, New York. He enlisted with the Union Army on Sept. 21, 1861, and was placed in the New York 75th Infantry Company (also called the 75th Regiment of New York Volunteers). His career in the military took him to Fort Pickens on Santa Rosa Island near Pensacola, Fla., and to New Orleans, La. Remington suffered a severe wound to his right arm during a skirmish near Port Hudson in June 1863. The resulting amputation of his arm led to his death. He is buried in Weedsport, N.Y.

April 2011 marks the 150th anniversary of the beginning of the American Civil War. Please see the following for much more information:

A selection of other noteworthy archival collections within the Louisiana Research Collection relating to the Civil War.

For material in all formats on the subject, search the library catalog, using subject keyword or any of the other searches.

Illustration caption: Top segment of one of the letters written by Alfred Parmenter while stationed in New Orleans in 1862, written on printed souvenir stationery, featuring a rather sedate Jackson Square. May not be reproduced without permission.