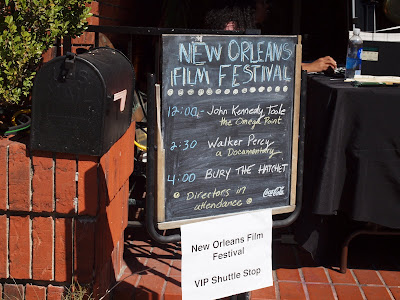 John Kennedy Toole: the omega point, Joe Sanford’s award-winning documentary about the life of novelist John Kennedy Toole, was shown at the Prytania Theatre today as a Louisiana Feature entry in the 21st annual New Orleans Film Festival. The venue of this event was especially fitting, as the old single-screen movie house itself provides the setting of one of the funniest chapters in A Confederacy of Dunces, when our fictional leading man Ignatius Reilly attempts to attend an evening show at his neighborhood movie theatre in uptown New Orleans.

Today’s show was much calmer than that, as an appreciative audience enjoyed the colorful, poignant, and beautifully-crafted film. As explained in a question and answer session afterwards, the authenticity of the documentary was assured by the avoidance of editorial speculation. Even the comments by scholars interviewed in the film were almost entirely factual rather than judgmental. The result of this careful work was a thought-provoking and sympathetic portrait of a man who was unique, richly talented and loved, yet isolated by complexities we can only partially understand.

The filmmakers and several of the featured interviewees have done research about the life of John Kennedy Toole at our Louisiana Research Collection. In attendance at today’s event were Joe Sanford (Director/DP/Writer/Editor); Bobbie Westerfield (Executive Producer); and Jay Weigel (composer of custom music score). 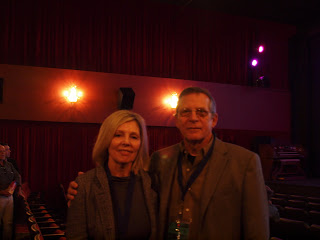