Books in the collection--older favorites: To Glorious Immortality. 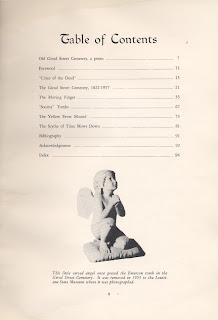 When cities grow, what was once on the outskirts of town tends to become prime real estate… even if cemeteries are on those grounds. In the 1950s, the historic but badly neglected Girod Street Cemetery was a casualty to urban development in New Orleans. Fortunately, prior to the demolition, historians Huber and Bernard made a point of documenting the existence of this place, originally meant to be a final resting place.

The Girod Street Cemetery was founded in 1822 by Christ Episcopal Church, and "came to a sorry end" in 1957, following a lengthy period of financial failure and physical neglect. More than 22,000 bodies were removed from the crumbling cemetery, when the land was sold to the City of New Orleans. Mass burials were in evidence, resulting from the yellow fever epidemic. The Protestant cemetery was deconsecrated on Jan. 4, 1957. Most of the remains were entombed in a drum in the Hope Mausoleum, 4841 Canal Street. The identities of many of those who had been interred in the cemetery are unknown, such as infants, slaves, and epidemic victims. Statuary and carvings were salvaged, and an estimated three million bricks were recycled for use in other building projects.

As we know very well in post-Katrina New Orleans, long-term neglect of a property results in a return to nature, reminiscent of scenes from the History Channel series, Life After People. The authors carefully and explicitly illustrate the decline of the Girod Street Cemetery, while remaining entirely respectful of the deceased, and of the original intentions of those who had created and cared for the cemetery in an earlier era.

More information about the cemetery, including a compilation of information from tombs, is available in the Louisiana Research Collection, Girod Street Cemetery records, Manuscripts Collection 220.