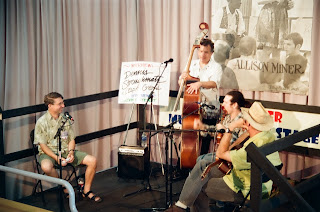 The only Thursday in the Jazz Fest schedule is often a favorite for locals. It’s less crowded and the food is just as delicious. Among the activities to enjoy yesterday was an interview of Dennis Stroughmatt and other members of L’Esprit Creole by our Special Collections colleague and Tulane history teaching fellow, Kevin Fontenot. Musical performance was liberally woven into the interview, and included French-language folk songs as well as complex, out-of-the-ordinary fiddle playing in country-sounding tunes.

This afternoon (Friday, April 30), on the same Allison Miner Music Heritage Stage inside the cool, dry grandstand building, another interview is scheduled: Bruce Raeburn, Director of Special Collections, will interview Louis Prima, Jr., Paul Ferrara, and Joe Segreto in a Tribute to Louis Prima. Both interviews are sponsored by the Louisiana Jazz and Heritage Foundation. 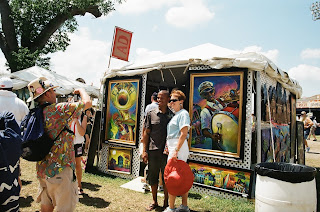 Lagniappe photograph from me, just for fun:
Terrance Osborne proudly posing with festgoers in front of his paintings. This year's official Jazz & Heritage Congo poster is named "Say Uncle" and features Uncle Lionel, of the Treme Brass Band. To the artist's right is "Rebirth", the official Congo poster for 2007.
Posted by Susanna Powers

(later note from Susanna Powers.) Every Jazz Fest, I try to attend the Thursday as an expensive but fulfilling personal tradition.  Posts from those annual Jazz Fest Thursdays are found on my photo blog, angels and people, life in New Orleans, on the following days:
April 30, 2010
May 5, 2011
May 3, 2012
May 2, 2013