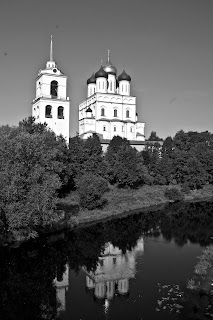 Author, photographer, and Tulane professor William Brumfield’s papers are in the process of being assembled as our Manuscripts Collection 709. The collection got its start with the typescript and galleys, with color and black and white printed photographs, created in preparation for the 1983 publication of Gold in Azure : One Thousand Years of Russian Architecture. Several other items from that era are in the processed collection in our stacks. Over the last few months, Professor Brumfield has begun to contribute more material to the collection, such as the complete set of Kennan Institute annual reports since 1989, as that publication has liberally published his photographs almost exclusively in every issue.

Carol J. Schlueter’s recent article in the New Wave provides a quick insight into the current scholarly and creative interests, activities and publications of William Brumfield. Another New Wave article, Photos: Remembering Russia, appeared June 30, 2011. Online exhibits of his photographs are openly accessible in various internet sites: Meeting of Frontiers: The William C. Brumfield Collection is hosted by the Prints and Photographs Division of the Library of Congress; The William C. Brumfield Russian Architecture Collection is a collaboration with the University of Washington Libraries; there is a photographic gallery of his contributions on the World Digital Library, a joint project of the Library of Congress and UNESCO; and the Culture in the Vologda Region web site hosts an online gallery and interview with Professor Brumfield which appeared on Russian television and radio. The monastery at Ferapontovo (a UNESCO World Heritage site) is the subject of Professor Brumfield's article, Ferapontovo: Medieval Treasure in the Russian North. Another 2010 addition is the article for Russia Now, Veliky Ustiug: Northern Jewel, which is illustrated by another new photographic slide-show. Internet publishing is particularly well-suited for presentation of Professor Brumfield's written and photographic work together; for example, brilliantly colored photographs also accompany his October 2010 article, Tomsk: Cultural treasure in the taiga. In 2011, the open access internet site, Russia Beyond the Headlines, has devoted their section "Discovering Russia" to a compilation of numerous photographic and audio slide shows created by William Brumfield.

Archival collections of personal and professional papers are usually the by-product of a person’s life. Often, these valuable items have been held together by relatives or other collectors, and then donated to, or purchased by, a library or other repository. But those scholars, public figures, writers and artists who intentionally gather their own papers for the benefit of future researchers, and donate them for safe-keeping to a specific repository, are a real boon to the preservation of our cultural heritage. At Tulane’s Special Collections, we greatly appreciate the generosity, enthusiasm and foresight of our self-archiving donors, including such notable individuals as Lindy Boggs, Art Silverman, Mignon Faget, Phyllis Hudson, LaVerne “Pike” Thomas, Catharine Brosman, Joel Fletcher, Bert Myers, Joel Grossman Myers, Joel Fletcher and William Brumfield. 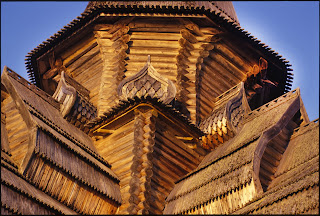 Captions: Left: Trinity Cathedral and bell tower, with Pskova River in foreground. Pskov. Photograph taken August 2009, and published in 2008-2009 annual report of the Kennan Institute for Advanced Russian Studies, Woodrow Wilson International Center for Scholars. Bottom: architectural detail of 1674 Church of the Dormition, Varzuga (Murmansk Region), Photograph taken July 20, 2001. Both photographs by William Brumfield, and were selected by him for this post.