By Tulane University Louisiana Research Collection (LaRC) - February 10, 2010
We have so many things to celebrate in New Orleans! The Saints Super Bowl victory was savored yesterday in the form of an elaborate and phenomenal heroes’ parade, the first of its kind, being called “Lombardi Gras” and “Dat Tuesday.”

We’re happy to note another award—Filmmaker Joe Sanford’s documentary, John Kennedy Toole: the Omega Point, recently won the Rising Star Award for Excellence in Film at the 2010 Canada International Film Festival. See the blog post dated Feb. 9, 2010, in Butterfly in the Typewriter: The Brilliant and Tragic Life of John Kennedy Toole, with further details and accolades. Congratulations to Joe Sanford and his associates in the process of creating this documentary, especially our friends Cory MacLauchlin, and Joel Fletcher, both featured in interviews in the film. We look forward to a local screening before long. 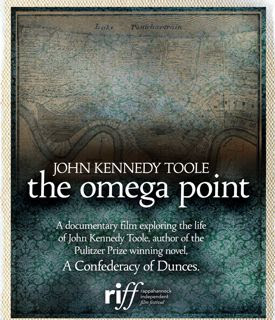