In the stacks with the Twins of Genius

By Tulane University Louisiana Research Collection (LaRC) - December 10, 2009
The Louisiana Research Collection is the home of the papers of George Washington Cable, author of the Grandissimes and Old Creole Days. Recently I received a reference question from a Mark Twain scholar, and had the opportunity to delve deep into Cable's papers. I found many interesting and delightful items along the way.

The collection contains many fascinating letters between Mark Twain and George Washington Cable. Between late 1884 and early 1885, Cable and Twain embarked on a speaking tour together, and the two were billed as "the Twins of Genius".

The George Washington Cable papers includes many letters from Twain to Cable. One of the more interesting letters from Twain I found was addressed to "my Dear Nephew", however it contained an envelope scrap showing Twain's return address and the outgoing address to Cable. The letter is dated January 15, 1883. I think what charmed me most was the quote Twain ended the letter with: "When an audience do not complain, it is a compliment, and when they do it is a compliment, too, if unaccompanied by violence." 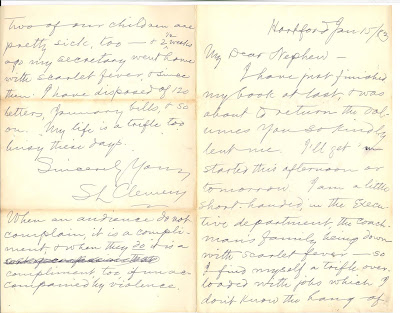 Twain and Cable had a reading in Chicago on January 17, 1885. On the second page of a letter to his wife, Cable describes the audience's reaction ('tempest of merriment') to Twain's reading of excerpts from Huck Finn, and reactions to his own work, "The Freedman's Case in Equity". 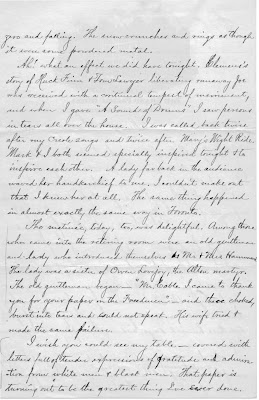 Sometimes the smallest pieces of ephemera from a person's life tell us interesting tales. While going through several of the boxes, I happened upon a small place card with George Washington Cable's name and a quote, and the initials AC at the top. 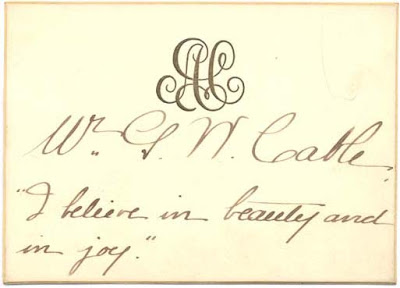 According to a note on the back of this place card, "At a dinner given by Mr. A. Carnegie to 24 literary men each found his card bearing a quotation from his own pen. These quotations had all been selected by Richard Watson Gilder while ill with rheumatism."

I have tried to locate information on this dinner, and who else may have been on the guest list of this dinner hosted by Andrew Carnegie. Please leave a comment if you may know anything about this event!