The early career of Mignon Faget 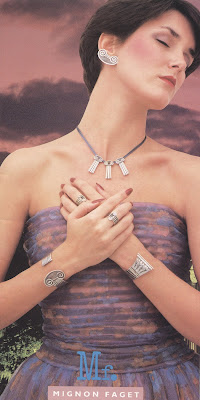 Mignon Faget is best known as a jewelry designer. But when she began growing her business in the late 1960s, out of a small studio on Dublin Street in the Riverbend area of New Orleans, she designed, produced, and promoted a line of women’s clothing and accessories described as environmental fashion. Natural forms, especially sea creatures indigenous to the Gulf Coast, were among her favorite subjects, and so the belts, tunic vests and short suede dresses were increasingly adorned with likenesses of snails, sand dollars, sea urchins, and crabs, often crafted in pewter tones.

The contents of Manuscripts Collection 715, covering 1968 to 1985, were donated to our repository by Mignon Faget in 1985. This collection is composed predominantly of advertisements from that era. D.H. Holmes, Kreeger’s, and Gus Mayer were among the local retail stores placing ads the Times-Picayune depicting Mignon Faget designer fashions. Her increasing success through the years is documented, as the print ads appeared first locally (Figaro, Arts Quarterly) and then nationally (Vogue, New Yorker, Mademoiselle). The business evolved by emphasizing unique and original jewelry designs in sterling silver, gold, and gemstones, and the stores have been effectively presented as galleries.

Interestingly, in 2009, the Mignon Faget website markets not only her jewelry, but also a diversified product line including fashion accessories, made from variety of materials (fabric, leather, paper, glass), as well as a variety of decorative forms, such as the popular post-Katrina Fleur de Lis, animals, and even elements of New Orleans architecture.

Photo caption: cover of the 1983 Mignon Faget jewelry catalog. This image may not be reproduced without permission.