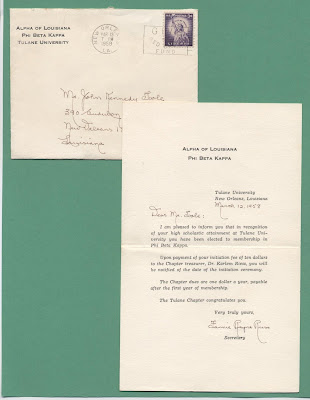 The Phi Beta Kappa Society’s Tulane chapter (Alpha of Louisiana) is celebrating its 100th anniversary this year. To commemorate this occasion, the national liberal arts honorary society has arranged a traveling exhibit which is on display in the Special Collections Gallery, 2nd floor of Jones Hall, across from the reading room. Local chapter officers have worked with Special Collections staff to include various intriguing items from our Manuscripts Collection 740, the John Kennedy Toole papers, as Toole was inducted into Phi Beta Kappa upon his graduation from Tulane in 1958. On display are his invitation to become a member, and membership certificate.

To mark the centennial, the chapter is also sponsoring a lecture by Dr. Matt Cartmill, Professor of Anthropology, Boston University, and Research Professor of Evolutionary Anthropology, Duke University. This will take place on Wed., April 22, 2009, at 5:00 pm, Jones Hall, Room 102, with a reception afterwards on the Jones Hall patio. The lecture is entitled, “Evolution, Creation, and Eternity: What’s Wrong with the ‘Creation’ Part of ‘Creation Science’”.

This year’s well-deserving Phi Beta Kappa inductees at Tulane had many obstacles to overcome during the last four years, as they belong to the Katrina class. These new members will be honored, welcomed and congratulated in a ceremony at the Lavin-Bernick Center in May.